The Case for Legal Diplomacy 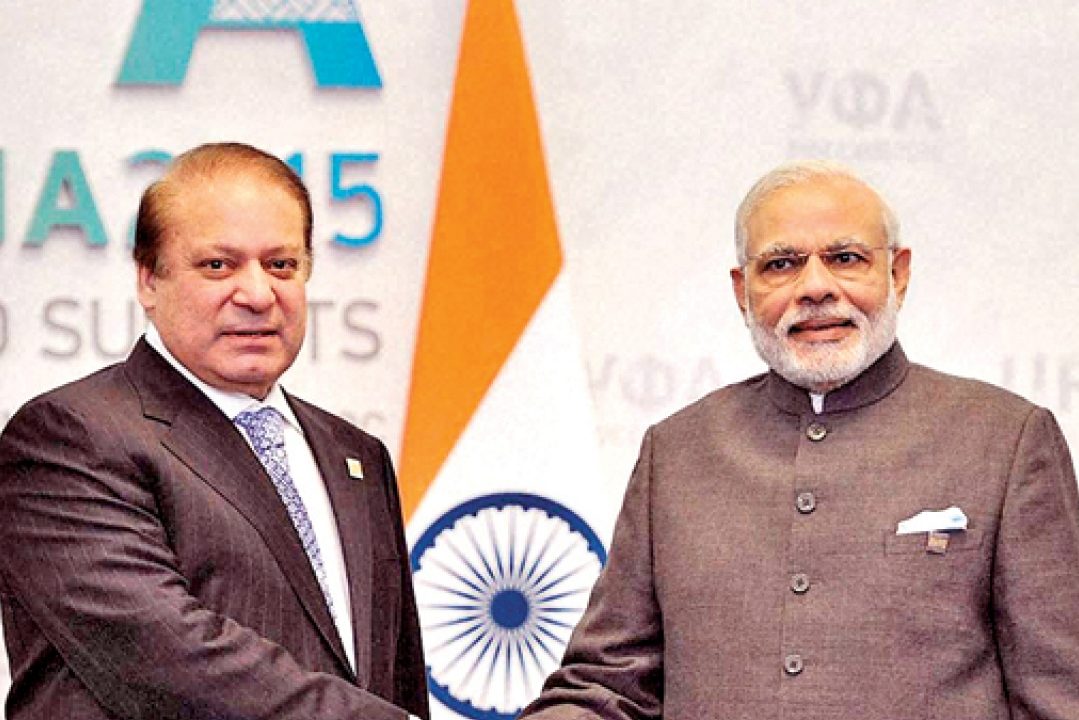 The contemporary world order has profoundly altered the traditional notions of effective conduct of diplomacy. Today, intelligent state-craft includes strategic use of new and creative forms of diplomacy to settle disputes in the international system and achieve foreign policy objectives.

Now consider, for example, the current diplomatic impasse between India and Pakistan. For quite a while, India has been insisting on restricting the agenda of any bi-lateral dialogue with Pakistan to only ‘cross-border terrorism’ issues while Pakistan favours a more comprehensive dialogue framework which also includes talks over the Kashmir dispute. These are essentially well defined political agendas. But, despite some degree of personal comfort between Prime Ministers Nawaz Sharif and Narendra Modi, the traditional bi-lateral channels of diplomacy remain log-jammed. Moreover, the various Track II dialogues involving retired military and civilian officials, prominent professionals and esteemed members of civil society from both the countries have not made much headway either. The attempted political matchmaking by informal envoys including former diplomats, businessmen and others has also not borne any fruit.

Given this context and the avowed Indian attempts to isolate Pakistan diplomatically, the one thing that we have not yet tried is ‘legal diplomacy’, i.e. a structured legal approach towards improving our foreign relations and realizing our foreign policy goals through the prism of relevant domestic and international laws.

In the remainder of this article, we make the case for Pakistan to also actively engage in legal diplomacy not only to find acceptable solutions to our problems with India but to incorporate the same more broadly as an integral and permanent approach in the conduct of our foreign relations.

The fact that Pakistan has not yet resorted to legal diplomacy vis-à-vis India is quite surprising, given that the long-standing thorny issues between the two countries including Kashmir, Siachen, Sir Creek, water etc. are all matters within the purview of international law as well as the domestic laws of the two states.

The more recent issues between Pakistan and India also involve extensive legal propositions and processes. This includes the slow progress on the Mumbai trial in Pakistan and Samjhauta trial in India, the Pathankot and Uri investigations and of course the Kulbhushan Yadav case.

Notably, many if not all of these issues constitute an independent and a separate case on which different teams of lawyers and investigators on both sides are independently working and strategizing on without consulting one another. This lack of coordination has inevitably led to a blame game with each side accusing the other of protecting its interests mainly through trial and investigation delays.

These recent matters between India and Pakistan are, in fact, representative of transnational crime scenarios where the crime of terrorism has been conspired in one jurisdiction and executed in the other. Some instances also involve links with third countries. Several different courts, therefore, are, or will be involved in almost all the said cases. The criminal law of both the states will be invoked. The law of evidence, with all its qualifiers, will be used for investigation and collection of evidence, whereby evidence must be transferred through a formal legal process to make it admissible before the courts of law. With trial witnesses physically scattered in two different jurisdictions, the attendant issues of recording their testimony and cross-examining them will need to be sorted. Moreover, there are outstanding differences regarding the legal basis and manner of the collection of intercepted calls and voice samples, and lingering issues such as the legal consequences of filing a Chalan on the basis of half-baked investigation need deliberation.

Given all these legal complexities, it is perplexing that officials in India and Pakistan investigating these matters have never interacted with each other to match their notes or share evidence collected during their investigations with one another in joint investigation meetings.

In the Mumbai case, the prosecutors from both the countries have never met each other, whereas, for a trans-national crime being tried in two different jurisdictions, preliminary meetings of prosecutors would otherwise be a certainty so as to divide the scope of the prosecution and the charges as well as the suspects for indictment. At the diplomatic level, the ‘cooperation’ in the Mumbai case has thus far been used as a smoke-screen for score-settling rather than for sorting the various legal complications involved in the case. In this context, the dossiers handed over to Pakistan’s High Commissioner by India were all actually inadmissible and of no worth before a court of law. Yet, this has been erroneously drummed up as a situation where although Pakistan has been provided with everything that it needs to convict the suspects, it is not doing enough on its part.

To be fair, the Pakistani side has also not been able to understand the complexities of this case and explain the reason behind the delays nor taken effective steps to redress the problems.

Notwithstanding their intellectual prowess in general, diplomats are not lawyers. In all fairness then, we should not expect them to grasp the subtleties of the various legal processes, especially at the trial level, which is generally considered as the most technical and highly confusing area of law even for seasoned practicing lawyers.

Of course, there is a political dimension to several aspects of the Mumbai case which our diplomats are trained to handle. But, at the same time, the legal steps that are required to be taken cannot be exempted from. What crucially needs to be understood by diplomats on both sides is that if the evidence received from the other state is not court-worthy, then the state cannot, through some executive miracle, make it admissible to force a conviction merely to satisfy the sentiments of the other state. It is simply impossible for a state to guarantee an outcome of a trial because it cannot, and should not, influence the independent functioning of its judicial process in deference to the rule of law.

Kulbhushan Yadav’s case, in legal terms, is representative of an intervention by a state actor in a neighboring state for which, subject to evidence, India as a state will bear responsibility under international law. This is so because Yadav’s acts are legally attributable to his employing entity, which is the sub-set of the Indian Government. The Draft Articles on State Responsibility, a binding international law instrument, are clear about this.

On the other hand, in the cases of Mumbai, Pathankot, and Uri, the offenders are neither state actors nor officials, but non-state actors, who conducted unauthorized and unlawful acts. Importantly, even though nationality is not the basis of responsibility in international law, Pakistan still continues to bear the responsibility of prosecuting them properly as a consequence of its international law obligations flowing from the United Nations Security Council Resolution 1373.

In this context, it is unfortunate that through traditional diplomacy alone, Pakistan has been unable to put across to the world the story of its prosecution of the Mumbai incident in particular despite undertaking several legal steps. These steps by the state of Pakistan include beefing up its prosecution team, designating a special judge for the trial who conducts hearings far more frequently than in ordinary cases, and contesting the request for relief by the suspects at every stage. Moreover, the state opposed the suspects’ bail applications and if not for this opposition Zakiur Rehman Lakhvi may have been released on bail in the very first year of trial because the evidence presented by the Indian side was insufficient to prevent it.

The state’s message is clear – Pakistan stands distanced from non-state actors and their irresponsible and unauthorized acts. Crucially though, this message will be better understood by the world community if Pakistan augments traditional diplomacy with legal diplomacy that will enable the state to properly document and present the various legal steps undertaken by it in the Mumbai case.

Legally speaking, Mumbai, Pathankot, Samjhauta and Yadav issues remain trials and cases. Therefore, in all these cases, I suggest the need for both the states to embark upon legal diplomacy, where they can communicate with each other in legal terms, in the language of the procedure, and move forward wholeheartedly for bringing the perpetrators in these cases to justice.

The ambit of Pakistan’s legal diplomacy need not be restricted to India-Pakistan issues. Our foreign relations with the United States can also be strengthened by engaging with Washington in dispassionate legal terms. Issues such as drone strikes and compensation for the victims of these strikes, the reimbursements due to Pakistan under the Coalition Support Fund, the procurement of sensitive defense equipment like the F-16s and the recently enacted Justice Against Sponsors of Terrorism Act (JASTA), all involve intricate questions of international law as well as domestic law of the United States. Pakistan, therefore, cannot effectively achieve its objectives with respect to these issues without complementing its traditional diplomacy with legal diplomacy.

Post-9/11, the United Nations Security Council has become a global legislative forum of sorts by passing a series of binding resolutions on counter-terrorism such as UNSC 1267 and UNSC 1373. This has necessitated the use of legal diplomacy at the United Nations as well.

Legal diplomacy can also bring internal clarity and harmony between the different state institutions and the federal and the provincial governments on the treatment of non-state actors by providing them a common legal agenda that will prevent them from buck-passing or engaging in a counter-productive blame game.

For all of the foregoing reasons, it is simply a necessary need of the hour for Pakistan to actively engage in legal diplomacy on all the fronts discussed in this space.