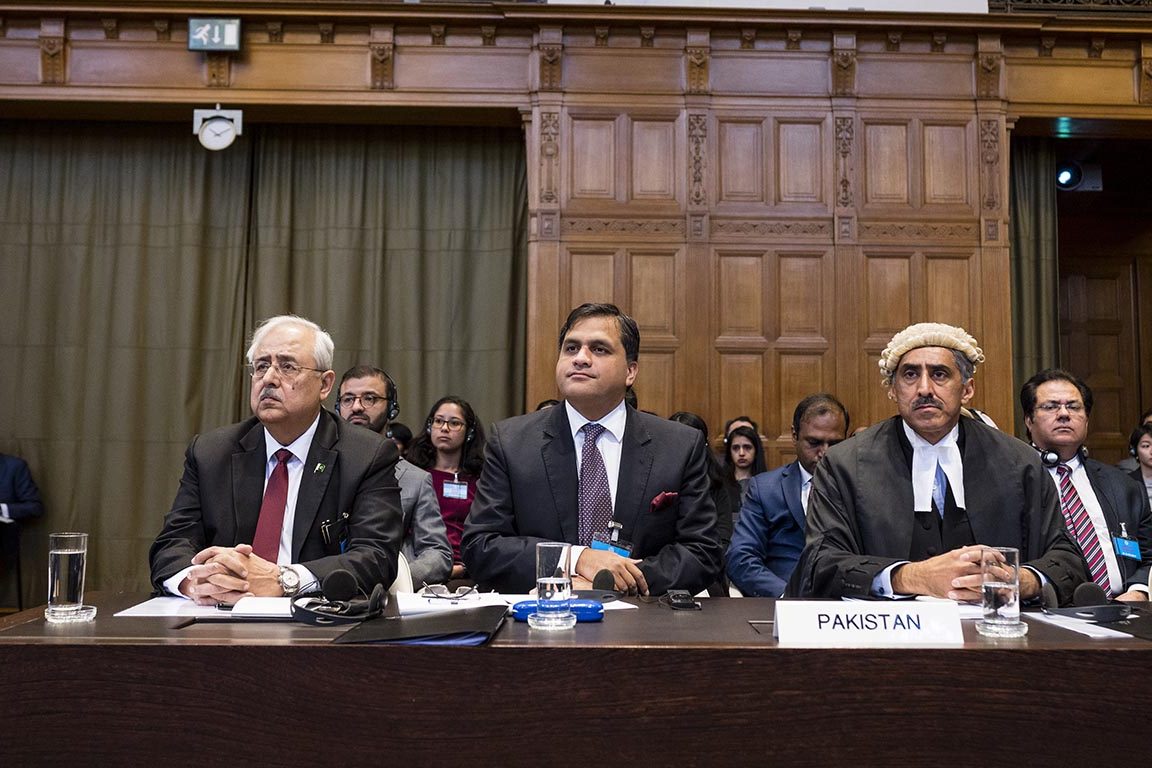 DAY 2 OF THE ORAL HEARINGS OF THE JADHAV CASE

Pakistan was represented by Mr. Khawar Qureshi QC who was acting in the capacity as the Counsel for the Islamic Republic of Pakistan. Broadly, his arguments related to the following aspects:

His presentation comprised of 9 points which shall be looked at hereunder:

He states that India evaded the following questions:

In this regard, he cited Indian journalists who agreed with Pakistan on this particular issue. One of whom was the son of the former Chief of the Army of India. Another journalist, which he cited, stated that the address of the fake passport was the same as the residence of Jadhav’s mother.

On 19th Feb 2018 Dr. Deepak Mittal was asked by media as to whether the President of Iran was asked about the issue of Jadhav’s abduction from Iran to which no clear answer was given.

India deliberately avoided a notification of any dispute as per the Optional Protocol of the VCCR. This was done mala fide to get an order for the indication of provisional measures which India wanted without conducting the oral hearings at that stage.

He further stated that India has been in lack of good faith which is recognized in international law (Certain Norwegian Loans Case).

He then went on to pose the following questions to India vis-à-vis its conduct:

In relation to the Passport issue, Pakistan produced an expert report by Mr. David Westgate who is an expert in this field and has 27 years of experience working in UK, India etc. More so, he has also worked with Indian intelligence. The expert was of the opinion that the passport was indeed authentic (hence affirming Mr. Khawar Qureshi’s point that India issued it).

In relation to the Military Courts an independent assessment was carried out by Military experts which stated the military court process are sound, however, he was critical of India’s distortion of the report by deviating from the literal meaning.

In relation to the 2008 Agreement, he noted that Art. 6 was misconstrued. To this effect, he showed a prior treaty on the same subject matter between India and Pakistan which stated more clearly the permissibility of denying consular access. By doing so, he endeavoured to illustrate that the 2008 Agreement can curtail the same.

India alleged maltreatment of Jadhav Pakistan during the time Jadhav’s family came to visit him. In response to such reports Mr. Khawar Qureshi presented a medical report of an Expert Doctor of German Nationality who examined him before the meeting of Jadhav with his family and declared him to be in excellent health.

He stated that a pre-requisite of granting Consular Access is to establish the nationality of the person in favour of whom diplomatic protection is being asserted, which India failed to do so. He cited Avena where the Court accepted USA’s objection against Mexico w.r.t to one individual whose identity was not established.

In addition, an expert report was added by Pakistan before the Court in regards to the jurisdictional basis and procedure and process in front of the Court. The report said that military courts are soundly based in statute and are thus legitimate. Art. 10 of the Constitution of Pakistan of right to a lawyer is reflected in Rule 23 PAA rules and is not manifestly unfair. Espionage jurisdiction isn’t unfair or improper in military courts.

The Rapporteur of the International Law Commission acknowledged that states do have recourse to emergency regulations in relation to performing consular obligations. Another author was cited to assert the point that national security may be a valid reason to deny consular access. Moreover,  the preamble of VCCR kept pre VCCR customary international law intact. Finally, he cited authors writing after VCCR as well which used State Practice to emphasize this exception to the rule of consular access.

In his opinion, what matters is the position in 1963 and not after.

Even though this formed part of his line of arguments. Not much was said in this regard.

In April 2017, MEA Spokesperson recognized the existence of the 2008 bilateral agreement. Moreover, utilizing Art. 31 of the Vienna Convention on the Law of Treaties, 1969 it appears that Article (vi) does concern consular access. Therefore, the agreement is not just limited to fisherman and nomads but also applies in situations such as this, contrary to what India stated yesterday.

Jadhav’s trial had adequate judicial safeguards in that it spanned over 4 stages over a period of nearly 6 months, was adjourned for 3 weeks to let him prepare. More so, India failed to provide evidence that Pakistan requested.

He then went on to rebut the law used by India at length. Firstly, he stated that the use of reports of Human Rights Committee is irrelevant to the VCCR and those reports do not concern Pakistan. The use of International Commission of Jurists report which stated that High Court and Supreme Court can’t take jurisdiction over such cases is incorrect in light of the Peshawar High Court judgement where military court decisions were annulled.

He also rebutted the jurisprudence of the  Inter American Commission of Human Rights (IACHR) used by India. In his opinion, the same were used in a context not relevant to the proceedings at hand. More so, one of the cases used by India (the Medellin Case), was a case where the Court distanced itself from interpretation of the VCCR which in the opinion of the IACHR was the job of the ICJ. So much so, the IACHR added that the functions of the ICJ are distinct from those of the IACHR. Therefore, use of such a precedent is not relevant to the present case. Lastly, even in a case such as this only a re-trial was recommended.

In relation to India’s claim of Art. 36 being a human right, he stated that in the Avena Case the Court categorically rejected this conclusion. More so, he cited Avena at length to illustrate as to how the Court refrained itself from ordering any such remedy that India seeks in the present case. Further, the case also notes the sentencing and conviction to be in the domain of the domestic courts.

The Peshawar High Court judgement stated that a judgement of the military court can be open to judicial review under Art. 199 of the Constitution as well as Art. 184(3) of the constitution. All the convicts in question within these cases were ordered to be released subject to appeal.

The observations were, inter alia, as follows: