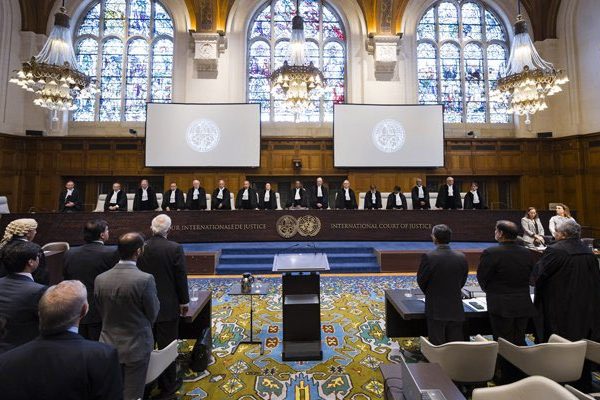 DAY 3 OF THE ORAL HEARINGS IN THE JADHAV CASE

Harish Salve began the 2nd round of oral arguments for India by stating that the counsel of Pakistan made a scathing attack on India as a State. He added that in maintaining the decorum of the Court, errors in India’s memorial ought to have been pointed out in the Counter-Memorial and reply that was filed by Pakistan.  Moreover, the demeanour and tone adopted by the Pakistani counsel did not show a sovereign State the respect that it deserves and India takes exception to such conduct.

India also asserted that the objections that are to be raised by Pakistan must be done so in accordance with the Rules of the Court which was not done by Pakistan. He added that it is up to the Court to assess if military Courts in Pakistan are due process compliant. There is no need for an assessment through expert reports as submitted by Pakistan. Pakistan didn’t answer the criticism of the reports of the International Commission of Jurists and the observations of the Human Rights Committee.

In regards to this issue, he referred to the demarche of Pakistan sent to the Indian High Commission which stated that Jadhav was an officer of RAW thereby rendering an acknowledgement on part of Pakistan as to his nationality. Further, in the letter addressed to the P5 by Pakistan the same was stated.  When India demanded consular access, not even once did Pakistan question his nationality. In this respect, it is important to note that consular access is to be provided at the time of the arrest and at that time no such objections were raised. Therefore, the receiving State acknowledged his nationality, contrary to what the Counsel of Pakistan asserted.

Further, he added that, the use of the Avena Case is fatal to Pakistan. In paragraph 63 the Court held that the detaining authority has the duty to give details to individual that is a foreign national. In para 88 the court says that there is nonetheless a duty upon arresting authorities to give information as soon as it is realized that the person is not a national or probably a foreign national. Pakistan had no doubt initially and conveniently believed his confession only to deny consular access later on.

Pakistan’s point on UNSCR 1373, in his opinion, is also equally without merit. Paragraph 2(f) is subject to paragraph 3(c) which requires cooperation through agreements to prevent acts of terrorism.  Pakistan has not entered into any such treaty despite repeated requests. In any case Art. 36 of the Vienna Convention on Consular Relations, 1963 (VCCR) doesn’t hinge on any MLA framework.

This, as per Harish Salve, has no legal basis. Art. 36 of the VCCR comes into play on the date of the arrest or at the very least without undue delay. It is unlikely that the conviction of Jadhav was subject to the possession of a passport or a lack thereof. He would have been convicted in any event and that is exactly why the issue of passport has no bearing on the right to consular access.  It is because of a lack of evidence that Pakistan is placing so much reliance on this point.  Pakistan has nothing on Jadhav except the extracted confession. More so, the press articles cited by Pakistan yesterday contradict Pakistan’s version. This conclusion, as per Salve, can be reached by reading particular paragraphs of the same press articles.

The counsel for India stated that Pakistan’s argument of the interplay of the Customary exception to espionage and the VCCR is against the plain language of Art. 36. On the construction of VCCR, he stated that it is compliant with Custom. For this assertion he relies on the travaux wherein it was stated that the whole principle of consular communication would have to be re-opened if exceptions were created to the convention.  This in his opinion left no doubt for exceptions under the VCCR.

As to the second point of Pakistan pertaining to the preamble crystallizing Custom, he stated that it cannot be whittled down by a preamble when the words of Art. 36 VCCR admit to no such exception. He also cautioned that if Pakistan’s approach to construction is accepted then the delinquent State can argue that their practice is compliant with Custom thereby rendering conventions useless.

The counsel for India states that Pakistan’s reliance on the reports of military experts ought to be disregarded when there has been a disregard of the observations of the Human Rights Committee, the reports of the International Commission of Jurists and a resolution of the European Parliament.

Delving further into the report of the military expert utilized by Pakistan wherein it was stated that the military courts have a sound legal basis. He stated that the same is of no consequence if they do not comply with the due process standards as internal law can never be made an excuse.

As to the appeals process, even though the report said that they are effective, the Court needs no experts to decide on the adequacy of the appellate process. To strengthen this argument, he relied on the Zaman Khan judgement of the Supreme Court and the 2019 report of the International Commission of Jurists wherein deficiencies pertaining to due process were highlighted.  He then added that the judgement of the Peshawar Hight Court in this matter is still not in compliance with the binding precedent of the Supreme Court wherein the Court held that Art. 10-A of the Constitution does not apply to the Pakistan Army Act. This is in addition to the appeals of the Peshawar High Court being contested by the State as well as the 2019 report of the International Commission of Jurists criticizing the paucity of appeals accepted by the Supreme Court of Pakistan.

Interplay of the VCCR and International Human Rights Law:

He stated that the only submission made by Pakistan in this respect was attacking the Jurisprudence of the Inter American Commission of Human Rights yet even still the Court deliberated upon the violation of human rights as emanating from a breach of Art. 36 of the VCCR.

Khawar Qureshi QC stated yesterday that restitution as granted in Avena and La Grande should also be made applicable to Pakistan owing to principle of equality of nations. In response, it was stated that the military courts in the US do not deny civilians of rights by such trials. Moreover, both legal systems are different and hence there is no basis for Pakistan’s argument in this respect.

He stated the example of the trial of Ajmal Kasab judgement wherein the Supreme Court of India held that since the penalty to be given is a death sentence, we would need to see the evidence first-hand.

Jadhav is a ploy to hide Pakistan’s own conduct i.e. State sponsorship of terrorism and the use of their soil by terrorists. He cited the Pulwama attack as an example along with the statement by Iran on 13th Feb which demanded that Pakistan be made accountable for the actions of non-state actors.  He then went on to add the grey-listing of Pakistan by the Financial Action Task Force, the existence of UN Proscribed entities JEM, FIF, AL-Qaeda etc.

Referring to the interview of the former Prime Minister Nawaz Sharif to Dawn wherein he admitted Pakistan’s complicity in the attack, he stated that the trials of the alleged Mumbai attackers have not been completed in 10 years then how is it that  Jadhav’s trial was completed so fast.

Finally, Dr. Deepak Mittal added an alternate prayer that in the event that the ICJ does not accept their original prayers, the decision of the military court be annulled and a trial be directed under the ordinary law of Pakistan in civilian courts. In such a trial, it was prayed that his original confession be denied and he be afforded consular access as well as assistance by India so that he is able to receive adequate legal representation.