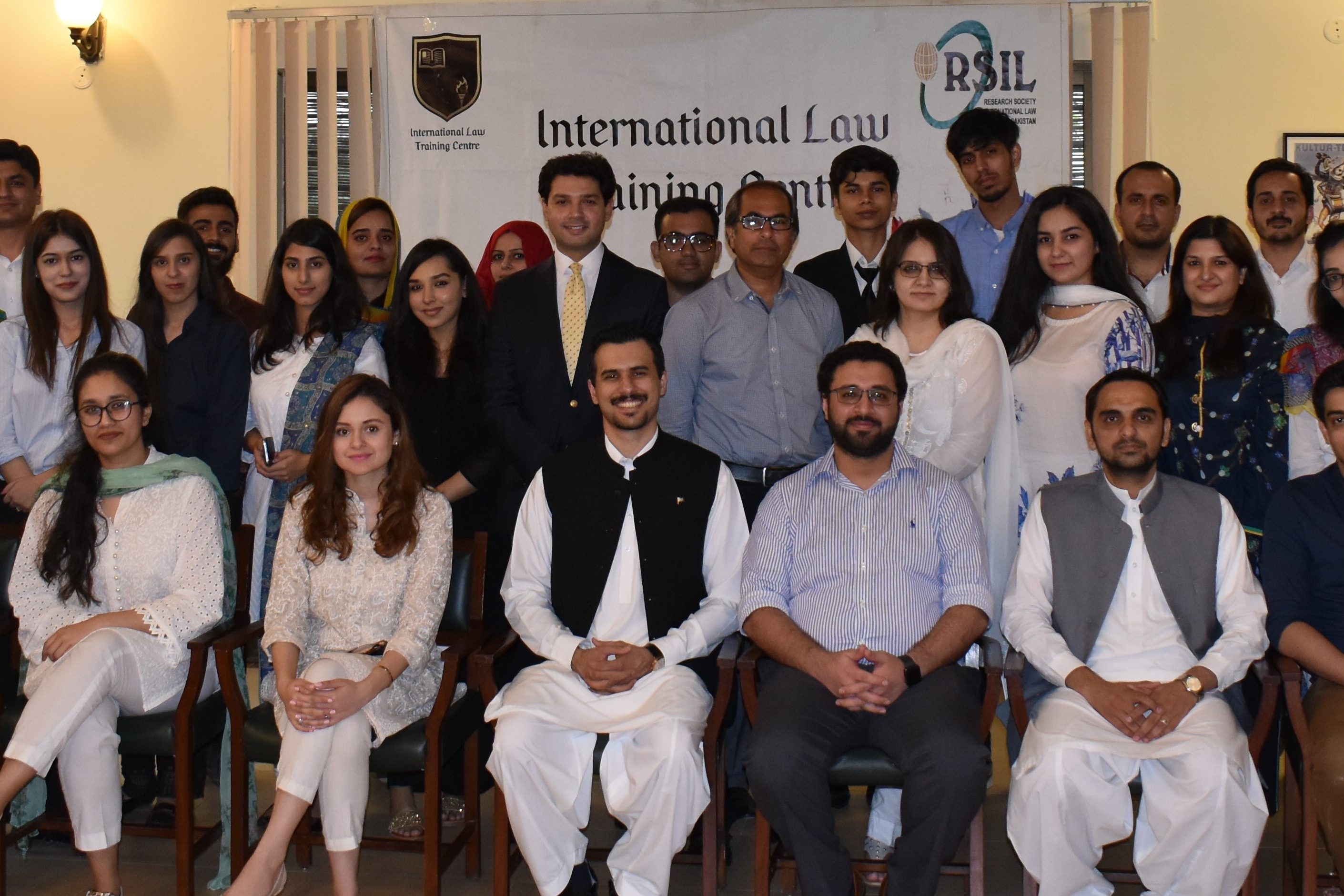 The Research Society of International Law conducted the second International Law Certification Course of the year in Islamabad from the 5th – 9th August 2019. The week-long course engaged 34 participants including professionals and students from diverse backgrounds including law, amongst many disciplines.

The first day started off with the registration of participants before a briefing of the agenda and an amicable ice-breaker session. Later, Mr Jamal Aziz gave a brief overview of RSIL, its mandate and its mission statement, followed by a run-through of public international law and the legal challenges that surface as a result. The participants were handed pre-training MCQs, to assess their knowledge regarding the general concepts of international law. The training proceeded to a study of the sources of international law; the international treaties, the ICJ Statute in particular, and how they corroborated the existence of contentious cases in the international law forum. The day ended with a post-training activity of the aforesaid lectures.

After the attendance, Ms Hijab Siddiqui and Mr Oves Anwar presented lectures on International Human Rights Law and International Humanitarian Law respectively, informing the participants of the nexus of the disparate notions, with a post-activity MCQ at the end of the lecture. Mr Oves Anwar referred to International Humanitarian as ‘the pragmatic marriage between humanity and barbarism’. To maintain the momentum of the sessions, Ms Minahil Khan communicated the Fundamental Rights enshrined in Pakistan’s Constitution as well as the current domestic human rights-centred legislations. Later, the participants were divided into 5 groups and each were given a domestic human rights legislation which they were to study analyse and present. This activity allowed them to not only understand a particular piece of legislation but also explain it to the fellow trainees.

Day 3 began with an extensive lecture on the Legal Framework of Counter-Terrorism by Ms Zainab Mustafa. She reviewed the international treaties and agreements on terrorism; the domestic legal framework and the judicial institutions entertaining cases on such areas. After lunch break, Mr Oves Anwar took the stage, enlightening the participants with the rubrics of International Nuclear Law⁠—which was a compelling topic to begin the day with. Later in the afternoon, Ms Ayesha Malik informed the audience of the phenomenon of the use of force. The day concluded after an examination on the current legal scenario of the prevailing Kashmir predicament which was conducted by Mr Jamal Aziz. This session was introduced into the program as an immediate response to recent events regarding the Kashmir issue.

Mr Oves Anwar directed the discussion to the Jadhav case at the ICJ—the background, the case facts, arguments by the counsels, and the final verdict on the issue—followed by an augmented edification of the case with the showing of LAWGIC videos on Jadhav. The participants were briefed about the final presentations that they had to present at the end of the final day, and then they were given preparation time for the said presentations. President Ahmer Bilal Soofi made an appearance, telling the participants of his experiences in the legal sector, and advised them on legal career choices. He engaged with them in an informal Q&A session which ended up motivating many to pursue their passions be it international law or anything else. Later, the participants’ attention was brought to the International Environmental Law, presented by Ms Ayesha Malik. This followed a lecture by Ms. Minahil Khan on Pakistan’s Environmental Laws and Jurisprudence. The day ended with a case study discussion based on the Legal Aspects of the Balakot situation conducted by Mr. Jamal Aziz and Ms. Ayesha Malik.

The last day of ILCC took a more practical shift, with lectures on legal research, possible career paths in the legal profession, CV drafting, and interview skills which were conducted by Mr. Abraze Aqil, Mr Oves Anwar and Mr. Jamal Aziz. The participants had their tea whilst they prepared for the final presentations. There were six teams, each composed of 5-6 members; the judges’ panel, which included Ms. Hijab Siddiqui, Mr. Oves Anwar and Ms. Minahil Khan were amazed by the brilliantly well-drafted arguments and power point presentations of the teams. Following lunch, the judges presented certificates to all the participants, appreciating their effort and enthusiasm, and the awards to the winners of the final presentation competition. These included the Best Team, Best Speakers and Best Researchers. To conclude the ILCC 2019 on a good note, the RSIL Team took a commemorative picture with the participants of the course.