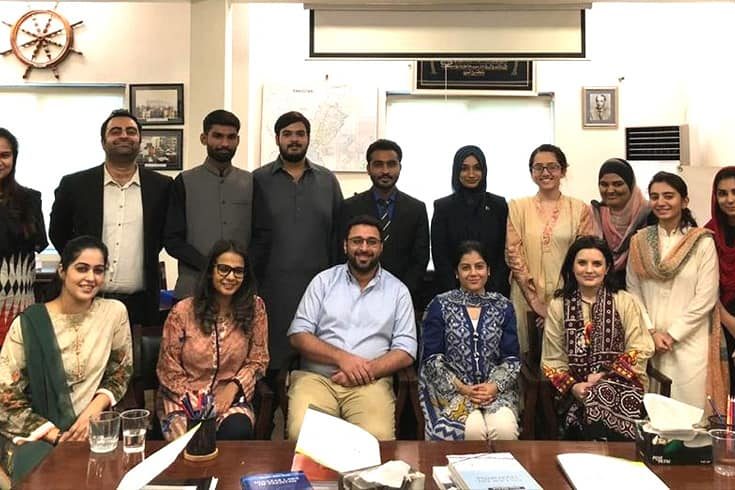 From the 1st to 5th of July 2019, the Research Society of International Law held the annual International Law Certification Course (ILCC) at its Lahore office. The week consisted of a series of lectures that covered a broad range of topics on international law categorized broadly as “Regional Stability, Indo-Pak”, “Application of International Law”, “Human Rights Framework” and “Skills Training and Debate”.

Day 1 consisted of an introduction to RSIL and a discussion on alternative career paths in law led by our Executive Director, Jamal Aziz. Mr. Jamal Aziz recounted the founding of RSIL as a private impartial legal think tank, laid down the structure of the organization and highlighted its work with various government entities over the years. He then went on to list the various legal vocations one can pursue including litigation, corporate advisory, academia and the public sector. It was an interactive session with participants chipping in their ideas and discussing the pros and cons of each field.

This discussion was followed by a lecture on the importance of international law, particularly its relevance to Pakistan. Mr. Jamal Aziz noted the role of international law in facilitating the functions of the international community. He focused on specific legal disputes affecting Pakistan such as Kashmir, the water dispute, nuclear weapons etc. and how international law applies to them all. The first day was concluded by an introductory lecture on Public International Law by Ms. Ayesha Alam Malik and Shayan Ahmed Khan, Research Associates at RSIL. The discussion included various sources international of law with application of different theories. Mr. Shayan Khan then went on to explain treaties, their formation as well as termination in international law with reference to the operative legal provisions.

Day 2 pertained to “Regional Stability, Indo-Pak”. Mr. Jamal Aziz began the session with the legal history of Kashmir and Siachen. He gave an overview of the evolution of the Kashmir dispute and moved on to the Siachen issue. Special focus was laid on how India has changed its international position over the years and the effectiveness of Pakistan’s subsequent responses. This was followed by a lecture on Jadhav at the ICJ delivered by Mr. Shayan Ahmed Khan. The lecture covered a broad base of topics including the facts of the case and the structure of the International Court of Justice. The session was interactive with participants discussing the merits of the case from Indian and Pakistani perspectives. The final lecture of the day was on International Humanitarian Law delivered by Ms. Ayesha Alam Malik. She started the session by explaining the origin of IHL with references to Islamic and Roman laws among others. It was followed by a discussion on international and non-international armed conflicts and a differentiation between combatants, civilians and their rights. The session ended with a group activity practicing the cardinal principles of IHL.

Day 3 focused on the “Application of International Law”, starting off with a lecture on Public International Law and the Use of Force delivered by Mr. Ali Sultan, Vice-President, RSIL. The session was interactive with participants discussing the UN Charter and applicability of its articles under different circumstances. This was followed by a lecture led by Ms. Zainab Mustafa, Deputy Director, RSIL on International Criminal Law. She defined the term and then explained its evolution through the years. The discussion revolved around different segments of the law such as the Rome statue, hybrid courts etc. The session ended with discussions on Palestine, Darfur and Afghanistan as case studies. The next session was on International Environmental Law by Ms. Ayesha Alam Malik. Ms. Malik noted multiple Conventions and Protocols on environment and explained the long-term effects of climate change. This followed up with a lecture by Ms. Samar Masood, Associate, ABS & Co. on International Trade Law. Different types of trade systems were discussed with reference to international organizations and a significant portion of the presentation focused on laws and treaties governing trade around the world. The day concluded with an open forum question and answer session with Mr. Ahmer Bilal Soofi, Founder and President of RSIL.

Day 4 revolved around the “Human Rights Framework”. Ms. Minahil Khan, Senior Research Fellow, RSIL, presented on International Human Rights and Pakistan’s Domestic Legal Framework. She started off by defining Human Rights and the emergence of International Human Rights Law from Magna Carta to the International Bill of Rights. The lecture specifically focused on categories of human rights and the protections given to people under Pakistan’s Constitution. This was followed by a lecture on the Protection of Women, Children and Minorities in Domestic and International Law by Ms. Noor Waheed, Jr. Research Associate, RSIL. The discussion focused on the rights for marginalized groups of the society in Pakistan’s Constitution and ended with an interactive session with the participants on the Child Marriage Bill 2019. The Director of RSIL, Mr. Oves Anwar, then delivered a lecture on International Nuclear Law. He engaged the participants in discussing the pros and cons of using nuclear energy and its safeguards. Pakistan’s nuclear capabilities and the chain of command to authorize the use of weapons formed a significant section of the presentation. This was succeeded by a session on counter-terrorism starting with Mr. Oves Anwar’s presentation on the International Counter-Terrorism Legal Regime which talked about banking and money laundering as financing channels for terrorism, along with FATF restrictions on Pakistan. This was followed by Ms. Zainab Mustafa’s lecture on the Domestic Counter-Terrorism Framework and Challenges. The main areas of focus were human rights vs. security, violence spectrum, the Anti-Terrorism Act and military courts in Pakistan.

Day 5 focused on “Skills, Training and Debate” with Mr. Oves Anwar giving a lecture on the how-to’s of legal research followed by Ms. Noor Waheed giving a lecture on the fundamentals of Resume Writing. The lectures gave way to a preparation period where the participants began brainstorming for the upcoming parliamentary style debate on Jadhav at the ICJ. Participants were divided into two teams comprising of 3 speakers and 2 researchers, representing either India or Pakistan. The debate concluded with Team Pakistan winning best team for their legal arguments and advocacy skills, with Aamina Rafique winning Best Speaker from Team Pakistan and Syeda Aamena Gillani winning Best Researcher from Team India. Additionally, a participant from Hyderabad, Sindh kindly brought the traditional ‘ajarak’ for Team RSIL as a token, which was presented to the team, much to their appreciation. The Closing Ceremony saw prize and certificate distribution by Mr. Ahmer Bilal Soofi.