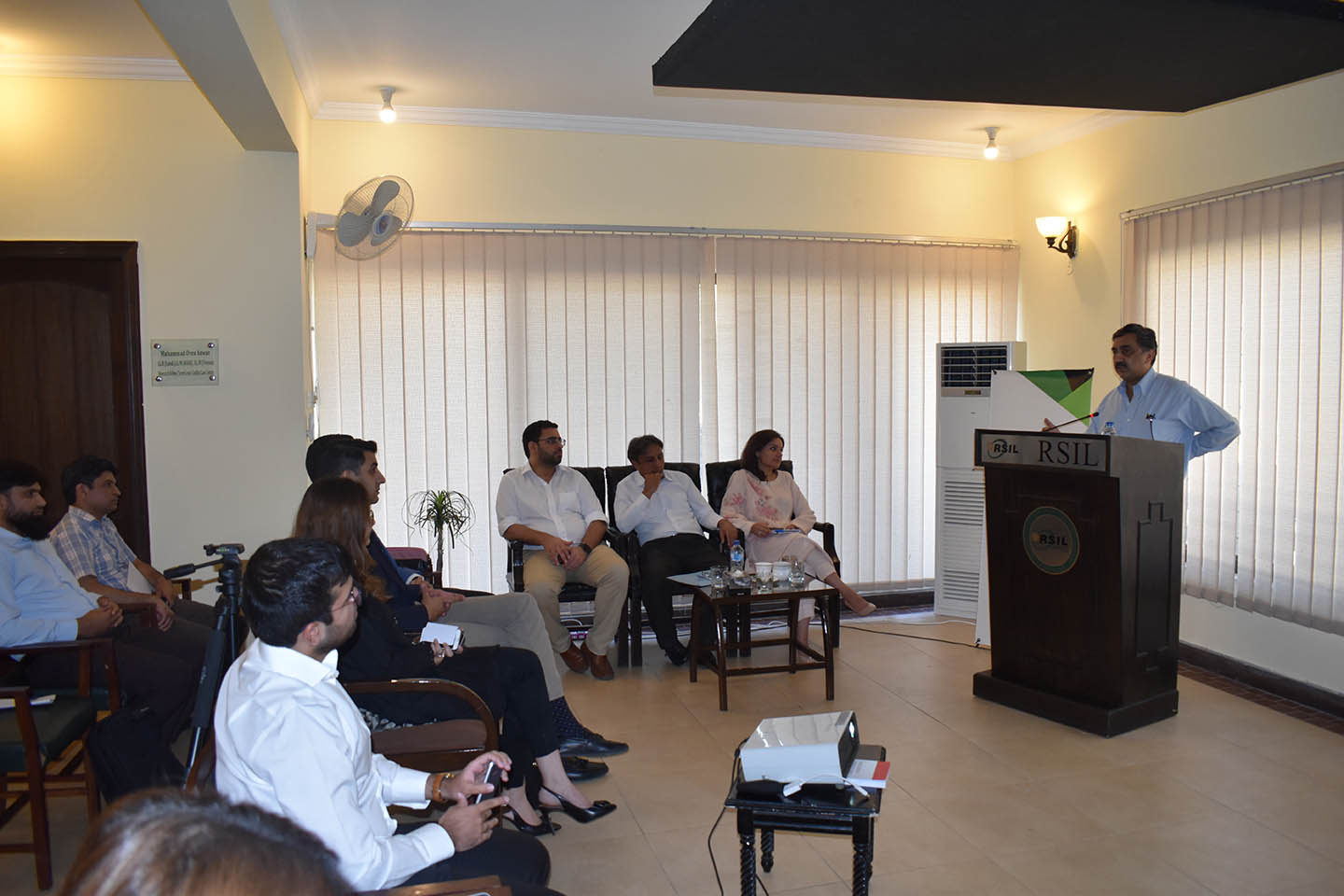 Inaugurating the RSIL speaker series, on the 27th of June 2019, RSIL, had the honour of hosting Ms. Kashmala Kakakhel to speak on Pakistan’s Climate Change Challenges. Ms. Kakakhel has been working on resilience programming and policy analysis for over ten years, and has worked with governments and development partners in Afghanistan, Bangladesh, Malawi, Kenya, Mexico, Myanmar, Nepal and Pakistan.

The talk started with a welcome address by RSIL’s Executive Director, Mr. Jamal Aziz who outlined the mandate of RSIL and the purpose of the Speaker Series, the aim of which is to create linkages with the legal community, and specialists from different backgrounds to facilitate research into a variety of areas from a legal and policy perspective. This was followed by a presentation by Ms. Minahil Khan, Senior Research Fellow at RSIL, which highlighted the legal dimension of environmental conservation and preservation. The presentation stressed on international and domestic laws that have been introduced to address the growing issue of climate change and outlined the evolution of the Pakistani Judiciary’s approach towards environmental protection as found in the Shehla Zia case, the Imrana Tiwana case, and the Asghar Leghari case.

Ms. Kakakhel’s discussion on Climate Change issues had two aspects: Firstly, to understand what the global agreement on climate change is and the implications of its enforcement and secondly, the legally binding elements of the Paris Agreement, along with Pakistan’s obligations under the compliance regime.

The talk began with an overview of the Paris Agreement which was drafted in December 2015 and entered into force in October 2016. The Agreement consists of 29 Articles and takes the form of a Treaty as under the Vienna Convention on the Law of Treaties.

Furthermore, the discussion summarized the major Climate Change events that have taken place; from the creation of the United Nations Framework Convention on Climate Change, to the Kyoto Protocol and now to the Paris Agreement, to understand the evolving approach of developed countries towards the climate change movement. Ms. Kakakhel explained the implications of the Paris Agreement for Pakistan and outlined the compliance regime as created under Article 15 of the Paris Agreement. Various elements of the Agreement were discussed, some of which are listed below:

Additionally, the discussion focused on the provisions of the Paris Agreement to understand their legal enforcement, and to determine the nature of the obligations that these provisions create. Ms. Kakakhel elaborated on examples of provisions such as Article 4.2 of the Agreement which creates legally binding obligations, along with provisions such as Article 9.1 which create collective, instead of individual obligations, which can have the effect of being implemented by some countries and not all. Moreover, substantive matters take the form of recommendations which are not binding. The lack of emphasis on legally binding provisions has led to a more ambitious substantive discussion on climate change issues where enforcement will be ensured through the compliance regime.

Furthermore, the discussion outlined the active role that the compliance committee would take to enforce legally binding obligations under the Agreement. The Rulebook on the Paris Agreement introduces modalities and procedures which establishes the compliance regime and aims to develop the rules of procedure to be applied in 2020 when compliance with the Paris Agreement is due to begin. The Compliance Committee will initiate the procedure once a country misses a submission under the reporting mechanism, after which the committee will be informed of the legal nature of the provisions under scrutiny, following which the committee would link the state to relevant entities within the UNFCCC to make recommendations or an action plan to ensure further compliance.

The talk ended with an interactive question and answer session in relation to Pakistan’s response to climate change issues and it was emphasized that Pakistan must be prepared for its obligations under the Paris Agreement, which must also be translated to provincial laws to ensure implementation of laws that are already in place.