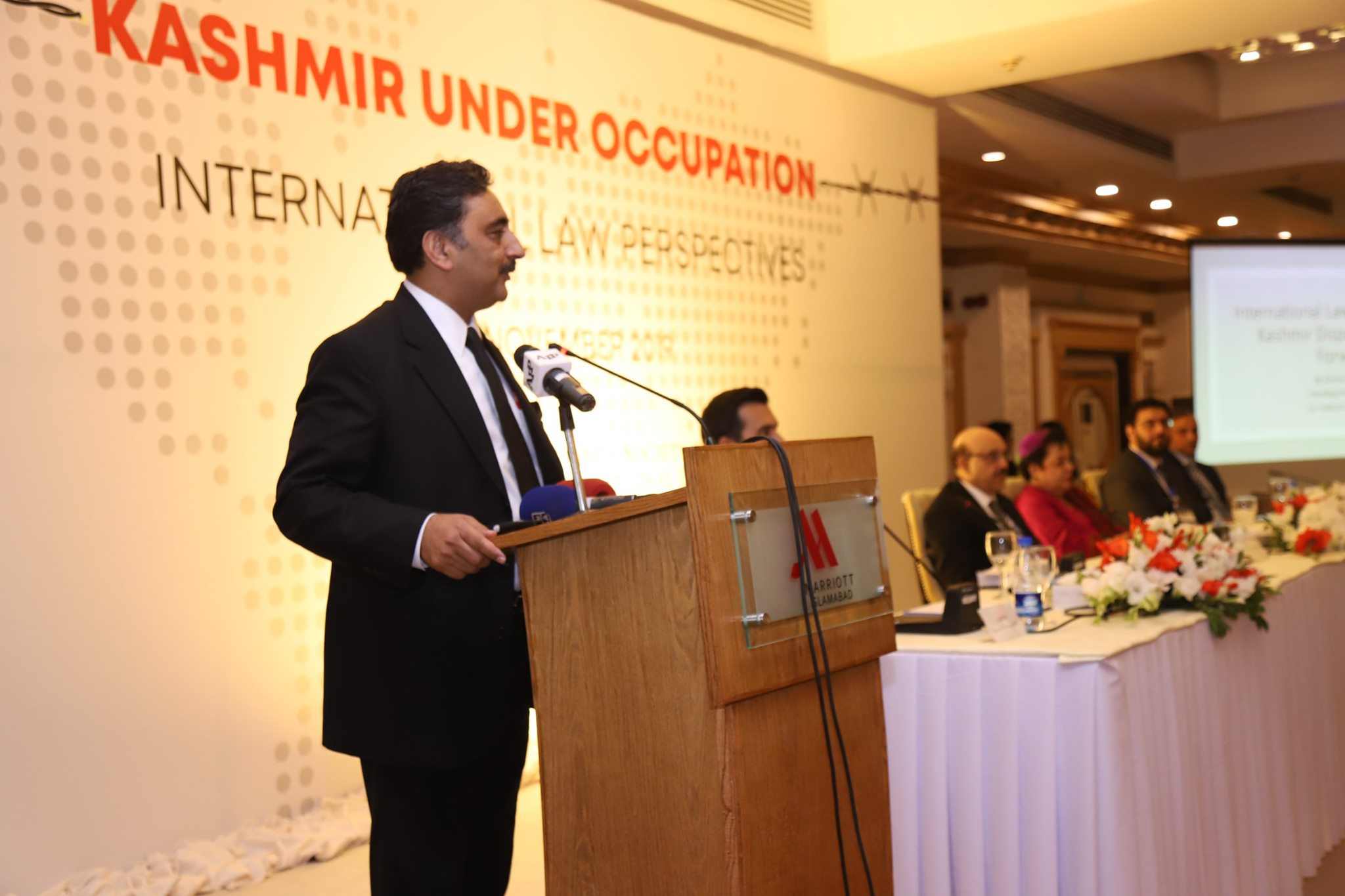 7th Nov 2019 | The Research Society of International Law held a national seminar on ‘Kashmir Under Occupation and its International Law Perspectives’. Dr. Shireen Mazari, Federal Minister of Human Rights, had been invited as the Chief Guest at the seminar, while Mr. Sardar Masood Khan, the President of Azad Jammu and Kashmir, was the Guest of Honour. In attendance were around 270 participants including various government officials, think-tank representatives, academics, civil society members, lawyers, students and other relevant stakeholders, invited to participate in the discussion on the issue of Jammu & Kashmir and provide clarity on the applicable international law and the main legal implications of India’s occupation and unlawful annexation.

The seminar, hosted by Ms. Mehreen Naushad, commenced with a presentation on ‘Sovereign Title, Occupation and War Crimes in Kashmir’ by Mr. Oves Anwar, Director Research, RSIL. Mr. Oves discussed the need to differentiate between human rights law and international humanitarian law, and to build the Kashmir narrative on the latter, including war crimes and crimes against humanity being committed in Indian Occupied Kashmir. Mr. Oves went on to explain the concept of occupation, the requirements for an occupation to exist, and its application to Kashmir. Finally, he outlined the imperative need for Pakistan to build a coherent narrative on its Kashmir policy.

This was followed by a presentation by Mr. Jamal Aziz, Executive Director, RSIL, on the ‘Contemporary Legal Implications and Lawfare Dimensions of the Occupation of Kashmir’. Mr. Jamal highlighted the inadequacy of the current narrative of Pakistan, and the need to instead utilize international law as an effective tool for Pakistan’s interests. He discussed how national liberation movements were gradually delegitimized through a narrative of terrorism, and Pakistan’s conventional response being inadequate. Mr. Jamal suggested a number of lawfare strategies in this regard, including academic engagement and capacity-building of the relevant stakeholders in international law.

Following this, Maj Gen Raza Muhammad (Retd.), a defence analyst, shed light on the operational aspects of the occupation in Kashmir. Not only did he outline the current situation in Kashmir, but also highlighted the way forward and the need for Pakistan to be more prepared in its response.

This was followed by an insightful presentation by Mr. Ahmer Bilal Soofi, President RSIL, on the international law dimensions of the Kashmir dispute, in which he discussed the right to self-determination and the need to examine the AJK Constitution, the Gilgit Baltistan orders, as well as recent and previous judgments of the courts to inform debate on the Kashmir issue. Mr. Soofi discussed short-term as well as long-term moves that Pakistan should make following India’s actions on 5th August, 2019. He reiterated the need to build a coherent narrative and having political consensus before adopting any options.

The Chief Guest, Dr. Shireen Mazari, then shared her insight on the topic, during which she highlighted the need to clarify Pakistan’s position and discussed the right to self-determination and its evolution. She presented her model on how the Kashmir issue could be resolved and also suggested immediate steps that need to be taken.

Finally, the Guest of Honour, President Sardar Masood Khan, gave his remarks regarding the responsibility of the UNSC to take cognizance of the Kashmir situation, and voiced his disappointment over the inadequate response of the P5 member States. He discussed India’s strategy in building the terrorism narrative and Pakistan’s way forward. He concluded by underscoring the need for Pakistan to take concurrence of the people of Kashmir before making any decision.

The President’s remarks were followed by a short Q&A session in which questions from the participants of the seminar were answered by all the guests and speakers.

The seminar ended with closing remarks by Mr. Jamal Aziz, who thanked the participants for their attendance and contribution.