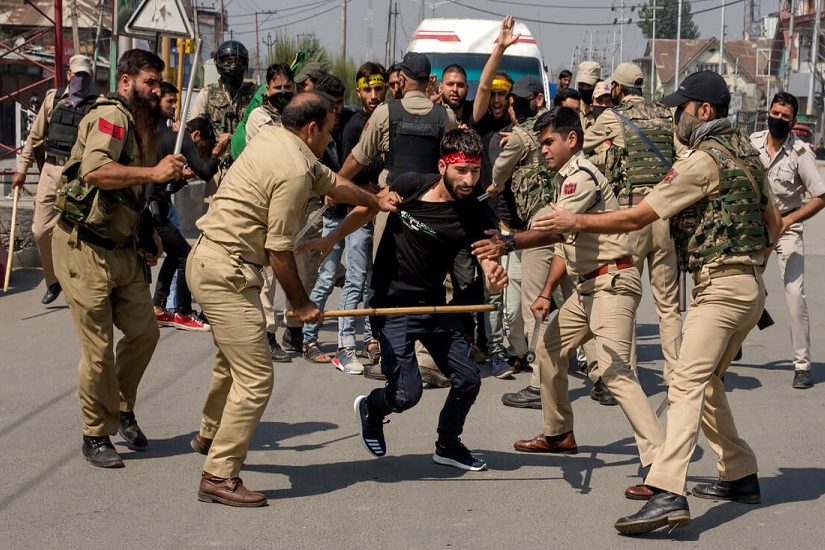 India’s right-wing BJP government had long threatened to revoke articles of the Indian constitution granting Jammu and Kashmir special status within the country. Article 370, which had been the basis upon which the Princely State had acceded to India, ensured the state a certain degree of autonomy, with its own constitution, flag and independence over all matters except defence, foreign affairs, and communications. On August 5, 2019, they made good on that promise. A Presidential Order was passed which essentially renders Article 370 benign – it deprives the state of its sovereignty, splits it into two territories, and rules it directly from New Delhi.

Amit Shah, India’s Home Minister, said the move would ‘encourage peace-building’. India’s actions in the build up to the revocation show it does anything but. Kashmir is the most heavily militarised zone in the world with 500,000 security forces deployed there to oversee a population of around 7.5 million people. An additional 38,000 troops were sent to the state in the last week. On the day before the Order was introduced in Parliament, there was a major security clampdown, tourists were hurriedly ordered to leave, a Hindu pilgrimage was cancelled, a communication blackout was imposed, restrictions were enforced on public gatherings, and local, pro-establishment politicians were placed under house arrest. India was aware its ‘peace-building measures’ were incendiary, orchestrated to inflame tensions in the region and provoke Pakistan, which had just requested the US to mediate the dispute now entering its seventh decade.

Whether India’s crowd-pleasing move will hold up domestically is yet to be seen. The legal acrobatics employed by the government in order to pass this law are as confusing as they are alarming. For instance, the Order bypasses the requirement of the Jammu and Kashmir government’s consent to such a revocation (as required by Article 370(3)) by requiring its own consent (through a central government appointed governor) as a stand-in. It is fairly likely that the Presidential Order will end up before the Supreme Court which will have the final say on its constitutional validity.

Under international law, however, this move is illegal. India has long occupied J&K as its presence meets the definition under Article 42 of the Hague Regulations 1907. This provision states that ‘Territory is considered occupied when it is actually placed under the authority of the hostile army’. The definition applies to contested territory.[1] The International Court of Justice in its Wall Opinion recognised that Israel was bound by Geneva Convention IV[2] and held that the Palestinian territories, whose prior status was contested, became occupied by Israel during the 1967 armed conflict. The analogy between Israel’s occupation of the West Bank and Gaza in 1967 is strikingly similar to India’s occupation of Kashmir following the 1947 armed conflict.

India has imposed its own authority on the area despite its limited autonomous status through the presence of half a million troops and the erosion of local authority through persistently rigged elections to install pro-Indian governments. Its authority has also been imposed through special laws granting the security forces special, wide reaching powers to arrest, kill on suspicion, search and destroy property suspected of belonging to insurgents. They also allow the security forces to preventively detain individuals without trial and without charges, approximately 20,000 individuals have been so detained. It has also frustrated Kashmiri’s right to self-determination through the occupation; an erga omnes obligation and a right guaranteed to all peoples under the UN Charter.

Furthermore, Security Council Resolution 47 passed in 1948 called for a free and fair plebiscite in the region. This referendum has never happened and, without it, India has no valid legal claim – the territory remains contested and under Indian occupation.

Civilians have been deliberately targeted by security forces, murdered in reprisal attacks, and summarily executed in custody. Reports of torture have identified thousands of cases indicating its systematic use to coerce those in custody to confess or reveal information. Cordon and search operations have involved the rape of women to collectively punish and humiliate an entire community. Indiscriminate weapons like pellet guns and cluster munitions have been used resulting in deaths, injuries, and blinding.  Meanwhile, these actions are met with impunity, for instance, a military officer accused of tying a Kashmiri civilian to his jeep and using him as a human shield was given an award. Failing to prosecute those accused of war crimes is itself a breach of the Geneva Conventions.

This brings us to the issue of Article 35A of the Indian Constitution which has also been revoked. This provision bars non-Kashmiris from settling or buying property in the state. It is an IHL-compliant law as per Article 49 of Geneva Convention IV which prohibits the transfer or deportation of persons in Occupied Territory. Its revocation now means that Indian citizens can permanently settle, buy land, and hold local government jobs in the area. It is a breach of GCIV and there are well-grounded fears that India may be attempting to change the demographics of the country’s only Muslim-majority state. This has already happened by splitting the state into two – Leh-Ladakh are predominantly Buddhist, Jammu has a Hindu majority, only Kashmir is Muslim-dominated. A West-Bank settler style arrangement may be in the works. Its effects will change the state’s make up entirely and could be a step to more disastrous international crimes.

In revoking Article 370 and 35A which granted Jammu and Kashmir limited autonomy, India has moved from an occupation to an occupation with an unlawful annexation. An annexation occurs when an occupied territory is incorporated into the Occupied Power’s state and regarded part of its territory. This is similar to the way Israel occupied and then illegally annexed the Golan Heights. The only lawful way Kashmir can ever be part of India’s territory is if it holds the plebiscite and the population decides to accede to India. Plans to change the demographics of the state by squeezing out locals are concerning for any further plans to hold a referendum.

At the time of writing, Kashmir is undergoing its fourth day of lockdown. The international community’s previously anaemic response to the issue, with calls for restraint or urges to remain calm, is not enough. India must face sanctions for its illegal actions commensurate with the wrong committed. These include a call of non-recognition of this illegal action, asset freezes and prohibition of economic and other support to the country. States have a duty to respect the Kashmiris’ right to self-determination. It is the least the world could do.

[2] Advisory Opinion Concerning Legal Consequences of the Construction of a Wall in the Occupied Palestinian Territory, International Court of Justice (ICJ), 9 July 2004

Statement: The Palestinian and Kashmiri Struggle for Self-Determination
May 18, 2021
Latest
Recent Projects