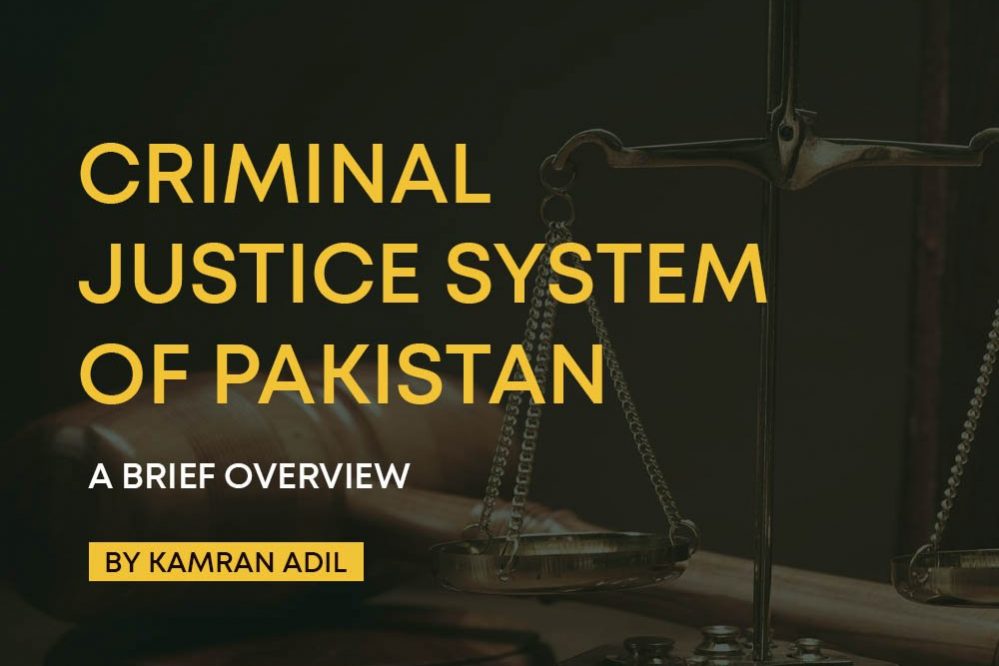 In a country like Pakistan, knowledge is seldom celebrated. It is more so in different fields of study that affect the lives of public at large. The extant material focuses on reform or improvements without stating clearly what the system is and how it operates. The knowledge gap qua justice sector is acute. A point of departure can be a brief elucidation of the criminal justice system, which this overview will try to provide in topical manner.

The Constitution of Pakistan provides for the separation of judiciary from the executive,[3] and this constitutional dictate has yet to witness fruition. The traditionally strong executive has remained central to power and has kept the legislature and the judicature peripheral by controlling the purse. Since 2007, the judiciary has gained some space by using its suo motu powers[4] to enforce Fundamental Rights coupled with its power to punish contempt or non-observance of its orders[5]; the legislature has not been able to assert its power through its conventions, privileges and rules, and due to its partisan nature. The Constitution establishes constitutional courts including the Supreme Court, High Courts, Federal Shariat Court, and provides for jurisdictions of different courts relating to constitutional, civil, criminal and service matters. The cumulative reading of the competence of federal and provincial legislatures, the jurisdictions of constitutional courts, and the fundamental rights[6] provides for the constitutional basis of the criminal justice system in Pakistan.

Under the Constitution, law and order is the responsibility of the provinces that discharge it through their provincial governments. In the provinces, the criminal justice system is managed through the Home and Prosecution Departments. The responsibility of the federation is concurrent to the provinces[7] and extends to federally administered territories of the Islamabad Capital Territory (ICT), the Gilgit Baltistan (GB), and the Azad Jammu and Kashmir (AJK). The federal government is also responsible for dealing with inter-provincial coordination in criminal matters that it carries out through the Ministry of Interior (MoI). In addition, the federal government has power over the Federal Investigation Agency (FIA), which functions as a federal police that investigates and prosecutes organized crimes of illegal immigration, human trafficking, cybercrime etc. The federal and provincial governments use their respective rules of business to exercise superintendence of the criminal justice system; this use of delegated legislation to counterweight the primary legislation is an important mechanism that must be researched thoroughly to bring about any reform in the system of governance of the criminal justice system.

Ontologically, the study of crimes is styled as Criminology and the study of the agencies that control or respond to crime is called Criminal Justice (CJ)[8]. The US has a rich tradition in the production of Criminal Justice knowledge, and offers distinct degree programmes. Based on the US pedagogical practice, the criminal justice system of Pakistan may be divided into five components: (i) Police, (ii) Prosecution, (iii) Courts; (iv) Prisons, and (v) Corrections. Each component has its own functions, organization, budget, working and legal framework. In practice, a typical provincial criminal justice system is managed by the Home Department under which the police and prisons work as its attached departments. A brief introduction to each component has been discussed below.

The courts that deal with criminal matters are magistrate and sessions courts. Contrary to the constitutional courts that are established under the constitution and have a binding effect on the executive, the magistrate and sessions courts are products of the Code of Criminal Procedure 1898, and essentially decide facts. The magistrates have charge of different police stations and their working is as important as of police stations. Owing to their significance, the Chief Justice of Pakistan, Mr. Asif Saeed Khosa, termed the police and courts ‘conjoined twins’. The courts adjudicate upon criminal matters by conducting trials in accordance with the law. The courts of magistrates and additional sessions are present at the level of tehsil/taluka in every district of the country. All the accused individuals have to be produced before them within twenty-four hours in accordance with the Constitution (Article 10). The courts follow an adversarial system of adjudication. Criminal cases are required to be proved beyond reasonable doubt, and the accused is treated as innocent unless proven guilty.

Prisons work as an attached department to the Home Departments of the provinces. Maintaining an incarceration-based prison system is a very expensive project for any economy. All over the world, the trend is to minimize the burden on prisons. In Pakistan, conceptually, every district should have a district prison and for every division, there should be a central prison; however, in practice, the district and central jails have not been provided to all districts and divisions of the country. The legal framework of prisons is very old in the entire country; prisons in all the provinces are constituted and function under the Prisons Act, 1894, except Sindh, where the Sindh Prisons and Corrections Services Act, 2019 has been enacted recently. The prison departments in Pakistan also contain corrections facilities that are aimed at providing skills to the prisoners so that they can rehabilitate themselves in society upon their return. Unfortunately, due to a lack of investment in corrections, the results of the corrections system are limited and their facilities are virtually merged into prisons establishments. The regime of parole and probation that work as alternatives to imprisonment were introduced in 1927 through the Directorates of Parole and Probation under Home Department. After independence, such directorates were introduced in all provinces within the Home Departments. For the sake of knowledge and in the context of Pakistan, the definitions of three key terms related to rehabilitation and reintegration must be noted:

[2] Francis Bacon’s Essay on Judicature is interesting and the difference can be inferred by looking at different law dictionaries. A good detail is available in Britannica Encyclopedia online at https://www.britannica.com/topic/administrative-law/Judicial-review-of-administration#ref417468

A Two-Tier System: Afghan and Ukrainian Arrivals in the UK
August 15, 2022