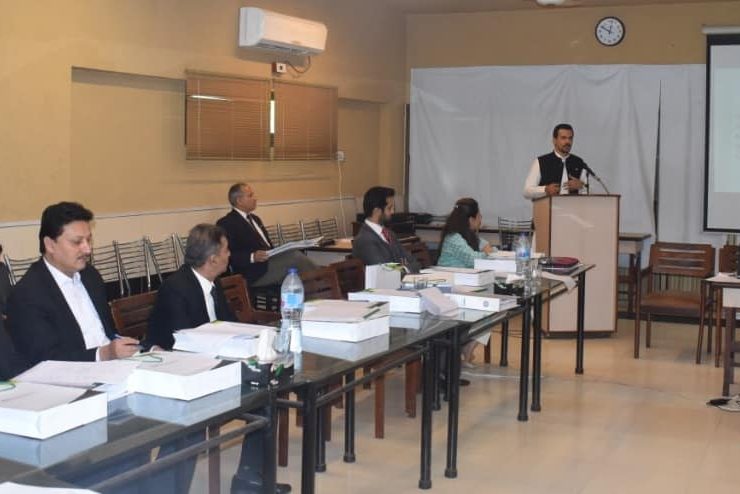 The Research Society of International Law (RSIL), in collaboration with the Sindh Judicial Academy (SJA), conducted a 2-day training on Counter Terrorism Financing and Anti-Money Laundering for judges in Karachi from 28th -29th October 2019. The training covered an array of topics pertaining to countering financing of terrorism (CFT) and anti-money laundering (AML) regimes, and was attended by 24 session judges from Sindh, Balochistan and Punjab.

The purpose of the training was to build capacity in judges regarding the global CFT/AML legal framework that is governed by international bodies like the Financial Action Task Force (FATF) and instruments i.e. the United Nations Security Council Resolutions (UNSCR) 1267 and 1373. The workshop also aimed to equip the judges with an understanding of Pakistan’s compliance to the international CFT/AML regime that included shedding light upon the existing domestic legislative framework on CFT and AML and the role of the various entities and law enforcement agencies in Pakistan in compliance with the global framework. The training focused on analyzing the Anti-Terrorism Act 1997 and the Anti-Money Laundering Act 2010, and also examined the powers and jurisdictions of entities including but not limited to the Ministry of Foreign Affairs (MOFA), Federal Investigating Agency (FIA) the Ministry of Interior (MOI) and the Counter Terrorism Department (CTD).

Day 2 of the training began with a lecture delivered by Mr. Jamal Aziz and Ms. Hira Arif Riar on the Domestic Implementation and Pakistan’s Response to the Global Legal Framework. Subsequently, Mr. Shahid Shafiq (Senior Faculty Member, Sindh Judicial Academy) conducted a session on Assessing Value of Evidence in ML/TF Trials and Judgment Writing. These lectures were supplemented with periodic assessments, including a post-training test, as well as detailed practical exercises throughout the day, supervised by Mr. Oves Anwar (Director of Research, RSIL).

The training concluded with a closing ceremony, after which certificates were distributed to all participating judges.