Business and Human Rights: The Impact of Corporate Activity on Women 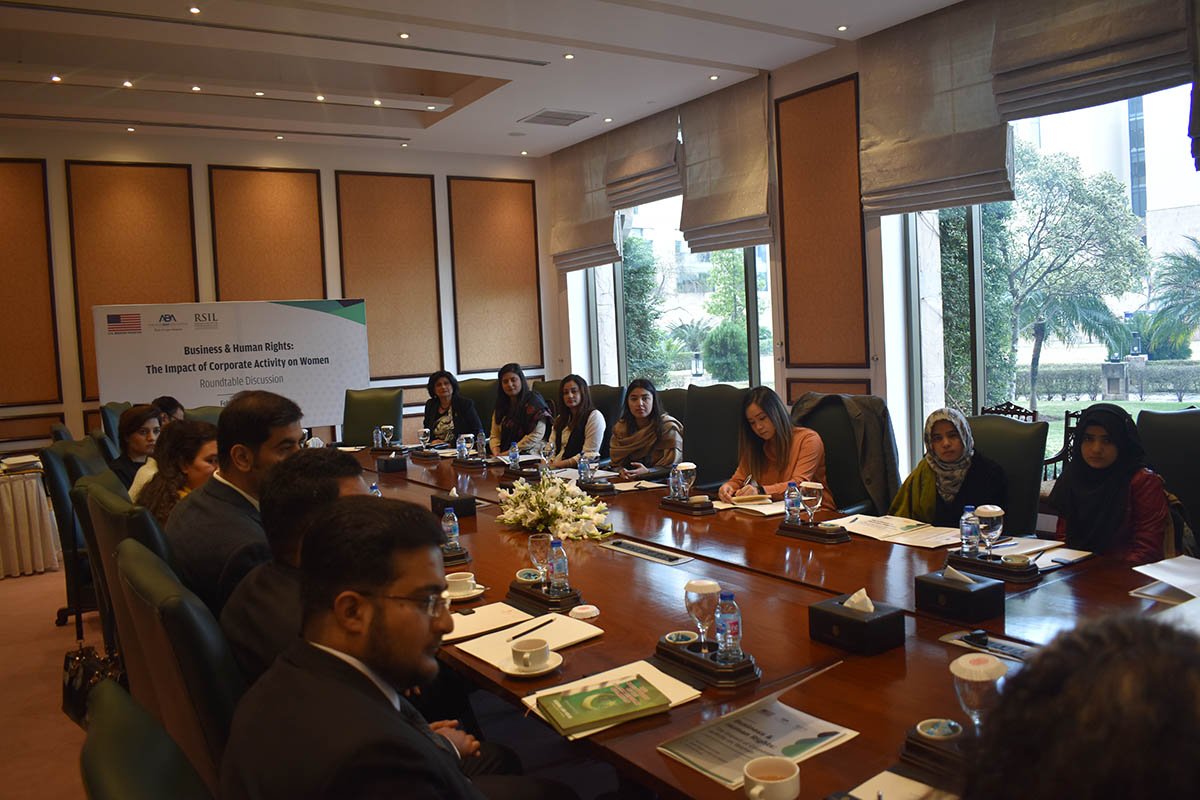 On 20th February 2020, the Research Society of International Law (RSIL), in partnership with the American Bar Association Rule of Law Initiative (ABA ROLI) and with funding from the US Mission in Pakistan, held a Roundtable Discussion on the Impact of Corporate Activity on Women in Islamabad. The aim of this discussion was to encourage the promotion of human rights in the business context with a specific focus on the rights of women.

The Roundtable Discussion centered around three thematic areas – Harassment at the Workplace, Equal Opportunity, and the Informal Sector – and was attended by representatives from business entities, members of the legal fraternity, academia, government and civil society organizations, which provided for a rigorous debate on the topic.

The event commenced with the opening remarks delivered by Mr. Oves Anwar, Director Research at RSIL. He outlined the work of the organization in general, and particularly with regard to Business and Human Rights.

Following this, Ms. Zoha Shahid, Research Associate, RSIL delivered a presentation on the impact of corporate activity on women. She highlighted how businesses affect women; the current status of women’s economic participation in Pakistan; the international legal framework protecting women in the economy; the role of the State, businesses, lawyers and the civil society.

Then, Ms. Hijab Siddiqui, Research Associate and Communications Lead, RSIL, presented the themes for the roundtable discussion, explained the format and objectives of the discussion, and focus areas within the themes. Ms. Siddiqui also introduced the Women at Work Video Series created by RSIL to develop awareness on the rights of female workers. These were also screened at the event.

This was followed by the roundtable discussion. The first thematic area, Harassment at the Workplace, was moderated by the Executive Director of Mehargarh. Mehargarh is a Centre for learning, working on the human rights issues in the country with a special focus on the rights of women. The Centre is actively involved in the nationwide implementation of anti-harassment legislation and works closely with the federal and provincial government to monitor effective implementation of Protection against Harassment of Women at the Workplace Act, 2010. In the session, a comprehensive discussion took place on how a safe working environment should be created for women at the workplace, what measures can be taken to ensure that an inquiry committee is established in every organization as per the requirement of the Protection Against Harassment at the Workplace Act 2010, how we can ensure that employers are aware of their responsibilities under the 2010 Act, and how businesses can support victims of harassment and empower those who come forward with their complaints.

Representatives of various organizations’ highlighted that they have complied with the requirements set out in the 2010 Act regarding the constitution of an inquiry committee containing at least one woman, and displaying the Code of Conduct within the organization in both English and Urdu. During the discussion, practising advocates suggested that the definition of an “organization” within the 2010 Act be expanded to include Bar Associations in order for this protection to be extended to lawyers of the district and superior courts. A participant suggested that harassment within the virtual space which comes in the form of threats faced by female bloggers and journalists must also be included within the ambit of the Act. A lawyer working on cases of harassment and gender-based violence highlighted that complainants need to be guided on how to file complaints that are consistent and detailed. Further suggestions included continuous training and education to develop the capacity of employers and inquiry committees, an anonymous feedback system within organizations, constant reinforcement of civic sense, and other voluntary steps that can be taken by organizations outside of their legal requirements.

It was interesting to note that representatives from the Government stated that any potential recommendations for amendments to the 2010 Act would be taken up by the Ministry and the relevant parliamentary committees. The need to have a follow-up mechanism to ensure organizations’ compliance with the 2010 Act by involving regulatory bodies like Pakistan Electronic Media Regulatory (PEMRA), Oil and Gas Regulatory Authority (OGRA), Securities and Exchange Commission Pakistan (SECP), etc. was also highlighted.

The first session was followed by a roundtable discussion on Equal Opportunity, within which equal remuneration, equal employment opportunities, and maternity protection were discussed. The attendees highlighted issues like the often unaccommodating attitudes of employers and the need for flexible timings to facilitate women and encourage their participation in the economy. Emphasis was also placed on the need to identify recommendations specifically on how to ensure equality of access, status, voice, visibility and agency of women before ensuring equal remuneration. It was also highlighted that there is a need to reform the national educational curriculum to incorporate such social issues and create awareness on them at an early stage through short stories on pluralism and equality. The possibility of quotas for women in organizations, including in the Board of Directors, was also proposed, along with the requisite trainings to ensure that businesses can meet such quotas with women who can fulfill such roles adequately.

Finally, on the theme of the informal sector, it was highlighted that domestic work is the most hazardous work environment and is a form of modern slavery since domestic workers are vulnerable within the privacy of the home, and internal trafficking is an ancillary problem connected to the wider issue. Hence, the need to have dedicated legislation for the protection of the informal sector including domestic workers was underlined. Child protection mechanisms were proposed, and it was also recommended that domestic workers under the age of 18 be made illegal and a criminal offence. Lastly, it was proposed that the regulation of domestic workers be carried out by the State through a dedicated institution to which information and monthly follow-up reports are submitted.

The session ended with closing remarks by the Guest of Honour, who thanked everyone for their time and contribution to promote business and human rights in Pakistan.

The Roundtable Discussion, through the insightful contribution of all the attendees, helped inform debate on the impact of corporate activity on women and ways through which women’s participation in the economy can be encouraged.