RSIL Speaker Series – Protection Against Harassment at the Workplace 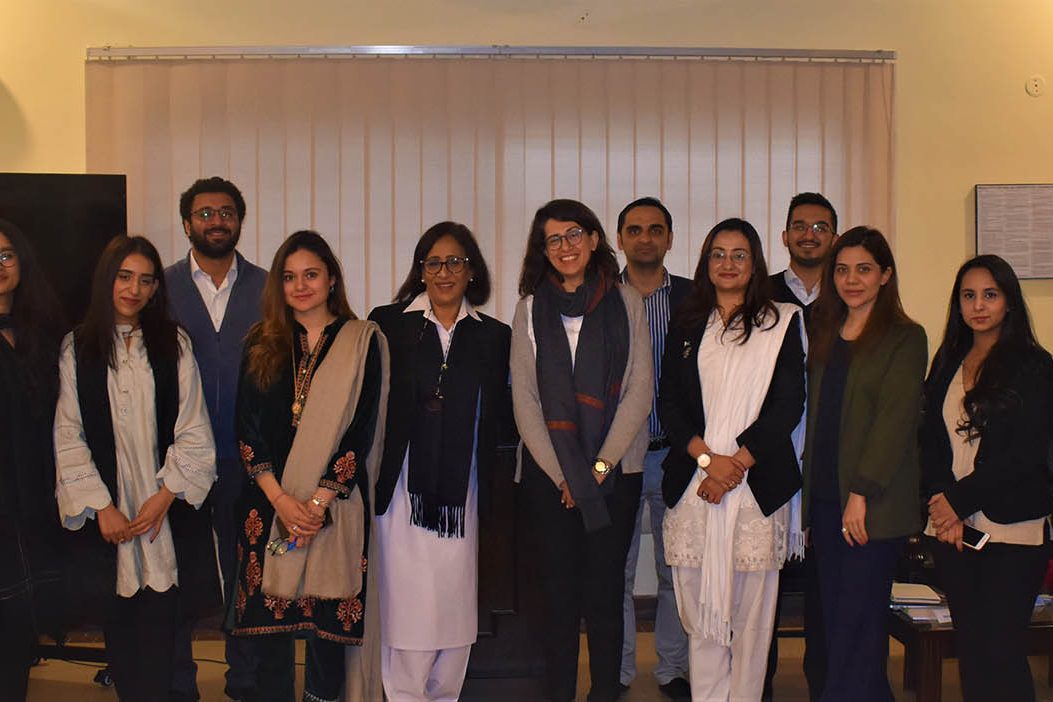 On 6th Feb 2020, the second session of the RSIL Speaker Series took place, focusing on ‘Protection Against Harassment at the Workplace’. This session, in particular, was conducted to acknowledge the tenth anniversary of the ‘Protection Against Harassment of Women at the Workplace Act 2010’, to review the progress that has been made since its enactment, and discuss the way forward with experts in the field.

Ms. Jamila Jahanoor Aslam joined the session as the Guest of Honour while Ms. Benazir Jatoi and Ms. Huma Jameel Baber were invited as the speakers to talk about the gaps that persist within legislation and implementation of the law. Ms. Jamila Aslam is an advocate of the Supreme Court and was one of the first female lawyers in Islamabad High Court. Her law firm, Jamila Aslam Law Associates conducts trials and appeals in all fields of law with a special focus on women rights. Ms. Benazir Jatoi is an advisor for the Aurat Foundation on law, gender and governance issues. She particularly focuses on cases related to women and minorities. Ms. Huma Jamil Babar is a legal practitioner who was nominated Chairperson of Protection of Women Prisoners Committee by the High Court and is also a Chairperson of the Progressive Youth Society of Pakistan and the Young Lawyers Wing.

Participants from different professional backgrounds were welcomed to share their perspective on the topic. Mr. Oves Anwar, Director Research, RSIL, delivered the welcome remarks and gave an insight into the mandate of RSIL. This was followed by a presentation by Ms. Minahil Khan, Senior Research Fellow, RSIL. Ms. Minahil Khan introduced the Women at Work Series initiative taken by RSIL. In her presentation she gave an overview of ‘The Protection against Harassment of Women Act 2010’ and touched upon different aspects of it including what constitutes harassment, the legislative protections and the responsibilities of stakeholders to ensure a safe work environment. She outlined the workability of the Act in the ten years and highlighted the way forward to effectively curb harassment at the workplace.

Ms. Zoha Shahid, Research Associate, RSIL, and Ms. Hijab Siddiqui, Research Associate and Communications Lead, RSIL, delivered a presentation on ‘The Avenues for Redressal for Harassment at the Workplace’. They detailed the legal redressal mechanisms available for the victims of sexual harassment in the Act.

This was followed by a panel discussion with our experts; Ms. Jamila Jahanoor Aslam, Ms. Benazir Jatoi and Ms. Huma Jameel Babar. Ms. Jamila Jahanoor Aslam stated that the definition of harassment should be expanded to include not just sexual harassment but other forms of harassment as well. She discussed the need to strengthen the implementation of the Act, and outlined that trainings must be held for employers in order for them to understand their responsibility under the Act, and make sure they constitute an inquiry committee and display the Code of Conduct in their respective organization.

During the panel discussion, Ms. Benazir Jatoi also expressed a number of concerns regarding the Act. She also shared the statistics regarding the number of cases filed before the ombudspersons of different provinces, while observing that although numerous cases have been filed in Punjab and Sindh, the same may not be said about Khyber Pakhtunkhwa and Balochistan since their first Ombudsperson has been appointed only recently in 2019.

This was followed by remarks by Ms. Huma Jameel Babar, who shed light on the process of filing a criminal complaint under Section 509 of the Pakistan Penal Code. She shared what complainants must be mindful of while filing the complaints. She also discussed how the employers should accommodate the complaint process instead of forcing victims to withdraw their complaints due to the fear of harming the reputation of the organization.

The panel discussion was followed by a brief Question and Answer session, in which one of the participants asked whether there is a requirement for an inquiry committee to be established in every city branch of an organization, to which Ms. Jamila responded in the affirmative. In response to another question regarding the judgments of the ombudspersons, Ms. Benazir Jatoi commented on the need for the judgments to be made publicly available and easily accessible on the websites of the respective ombudspersons for the general public to be more informed regarding sexual harassment at the workplace.

Following this, Mr. Oves Anwar thanked the participants, esteemed speakers and the Guest of Honour for their presence at the event. The session was concluded with closing remarks by Ms. Jamila, in which she shared relevant personal and professional experiences and thanked the Research Society of International Law for this initiative.

To participate in similar talks, events and trainings by RSIL stay tuned to our website.