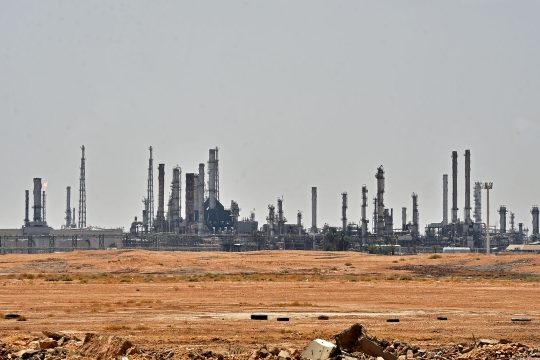 On September 14th 2019, two Saudi Aramco oil facilities were attacked with drones, with the Houthis, a Yemeni rebel group engaged in a conflict against Saudi forces, claiming full responsibility. This was considered the biggest attack on any oil infrastructure since Saddam Hussein’s invasion of Kuwait in 1990[1], causing a 20% increase in the price of crude oil and setting back oil output by 50%[2], the steepest downfall in oil supply since the 1970s.[3] This article seeks to assess the legality of these attacks under international humanitarian law (IHL). It will argue that due to the indirect nature of the military advantage sought to be gained by an attack on civilian oil infrastructure facilities, the targeting of Saudi Aramco was unlawful.

Legality of the Attack

In order to assess the legality of an attack under the law of armed conflict, it must be conducted in accordance with, inter alia, the principles of distinction and proportionality. The principle of distinction requires that all involved in an armed conflict must distinguish between combatants and military targets and civilians and civilian objects. The principle of proportionality demands that any harm to civilians be proportionate to the military advantage anticipated.[4]

The Principle of Distinction

The Additional Protocol I (API) [1977] defines military objectives in Article 52(2) as follows:

“Objects which by their nature, location, purpose or use make an effective contribution to military action and whose total or partial destruction, capture or neutralization, in the circumstances ruling at the time, offers a definite military advantage.”[5]

The International Committee of the Red Cross (ICRC) has acknowledged that this is a norm of customary international law applicable on all States in international and non-international armed conflicts.[6] The definition in Article 52(2) is applied cumulatively, in that the target object must both make an “effective contribution to military action” and the attack on it must offer “a definite military advantage” to the party that carries it out.[7] The issue then is with dual use objects, such as oil facilities, which are used for both civilian and military purposes.

There are two different interpretations of Article 52(2) in State practice – a broad application which legitimises the targeting of a large range of dual-use objects as they contribute to war-sustaining efforts, and; a narrow interpretation which requires that the target’s contribution to the military action in question, be direct.

The broad interpretation has largely been favoured by the United States. In its Navy Handbook, the definition of a military target provided is broader than that in Article 52(2) and states that an object is a valid military objective if by its nature, location, use, or purpose, it “makes an effective contribution to the enemy’s war fighting/war sustaining effort”.[8]

With this, the US seeks to legitimise attacks on any target that was found to “indirectly but effectively support and sustain the enemy’s war-fighting capability,” including economic targets.[9] In their treatise, Bothe, Partsch and Solf also allude to the targeting of economic objects giving rise to “effective contribution to military action” – citing the example of the destruction of cotton bales in the American Civil War (1870s), which disrupted the inflow of finances that would prolong the war.[10]

Similar language is used in the military manuals of Ecuador, while the United Kingdom and Australia provide for targeting dual-use targets (including “refined oil-production facilities”) as military targets, subject to the qualifications of military advantage.[11] However, no other States explicitly mention the lawfulness of targeting war-sustaining objects in their military manuals. In practice, it is seemingly only the United States which has ever attempted to target war-sustaining objectives.

In 2016, the United States of America targeted oil fields in the region under the control of ISIS in Syria, including the destruction of oil trucks, oil wells and “bulk cash stockpiles,” in a bid to cripple the vestiges of a formal economy set up by the group, and thus strip them of monetary resources needed to prolong their war efforts.[12] The bombing of ISIS’ oil infrastructure was criticized as toeing a dangerous line as some found that the connection between exports (including revenues earned from oil exports) and the military action was “too remote” to constitute a direct military advantage.[13] This line of reasoning follows the 1988-94 San Remo Roundtables, where it was contended that the war-sustaining argument can open the door to indiscriminate attacks akin to those in World War II, which resulted in the destruction of entire cities.[14]

The same broad approach was adopted later in Afghanistan in 2017 – with the targeting of ‘laboratories’ that were engaged in the production of heroin and other opiates, to disrupt the narcotics industry.[15] Despite the precision of the attacks, experts studying a sample of 31 targets found that only one target was factually engaged in heroin production – the remaining compounds were long abandoned by the locals.[16] Legal commentators stated that the targeting of the narcotics industry stretched the limits of Article 52(2), and was likely to set a dangerous precedent in the future.[17] Certain NATO countries also opted out of the bombing, including Germany, Italy, Poland, and Spain, however the reason for them doing so is not clear.[18] Furthermore, a UN report published in 2019 alleges that 31 civilians, including 14 children were killed as a result of this operation[19] marking significant civilian costs. The UN report concluded that the war-sustaining argument is not supported by IHL as it is a violation of the principle of distinction to construe financial assets as military targets and unnecessarily puts wider civilian infrastructure at risk.[20]

It has been argued that during a war, practically all revenues collected from industries are used to fuel the war effort. In case of the United States, Goodman asks whether it would be lawful to target Apple Headquarters, or the entire Silicon Valley on the basis of their contribution to the US war effort?[21] Doing so may present a ‘slippery slope’ which could expand the scope of the principle of distinction to the point where it is redundant.[22] The narrow approach argues that there needs to be a ‘direct’ contribution to the military advantage as laid out in 52(2), i.e., attacking any military object must bring about a definite and direct military advantage for it to be lawful. The narrow approach would find the targeting of oil facilities to be illegal due to the fact that it does not directly contribute to military action.

The Principle of Proportionality

The principle of proportionality is found in Article 51(5)(b), Additional Protocol I and prohibits:

“an attack which may be expected to cause incidental loss of civilian life, injury to civilians, damage to civilian objects, or a combination thereof, which would be excessive in relation to the concrete and direct military advantage anticipated.”

At Aramco, there were no civilian casualties, however, the notion that an attack may be disproportionate because it may have caused injury to civilians was addressed in the case of Prosecutor v. Prlić [2017].[23] The International Criminal Tribunal of Yugoslavia (ICTY) ruled that whilst the Old Bridge of Mostar, a dual-use object, was a legitimate military target, the resultant impact on civilians would far outweigh any concrete or direct military advantage anticipated by an attack. Therefore, its destruction was disproportionate and the attack was unlawful.[24] The case indicates that injury to civilians, such as that of lack of an energy source from an oil facility in this case, is to play a part in any proportionality analysis.

Was the Saudi Aramco attack lawful?

With attacks such as Aramco, a narrow approach, which emphasises the need for directness in achieving the assumed military advantage, is a more reasonable one. The lack of limitations in applying the broader approach increases the likelihood that civilian structures will be targeted. The war-sustaining argument can prove damaging as it would legitimise targeting not just economic structures, but even scorched earth policies.[25] The line between civilian objects and war-sustaining targets becomes virtually indistinguishable, paving the way for indiscriminate attacks.

However, even if we assume the oil refineries were legitimate military targets, the proportionality principle would come into play, as in Prlić. At Aramco, the attacks were executed with pinpoint accuracy resulting in no civilian casualties, or injuries – yet this statement cannot be expanded upon to mean that civilians were unaffected by the attack entirely. There is no information available about impact on civilian users, or power outages that resulted from the disruption of energy supply. Neither is there definitive information about the state of the Saudi economy after the Aramco strikes (whose losses amounted to two billion USD[26]), and whether this cost was imposed on civilians by the government in the form of raised taxes, or through other fiscal measures. Thus, it would be unfair to make claims about proportionality without having the complete facts. But in terms of the directness of the attack on a war-sustaining civilian target vis-à-vis the perceived military advantage, it appears that the attack at Saudi Aramco itself was unlawful under IHL.

[9] Based on the 1987 Commander’s Handbook on the Law of Naval Operations (NWP) and its Annotated Supplement of 1989, quoted in Targeting “War-Sustaining” Objects in Non-International Armed Conflict by Ryan Goodman, 2016.

[13] Accepting that War-Sustaining Objects are Legitimate Targets Under IHL is a Terrible Idea, Yale Journal of International Law, 2016. https://www.yjil.yale.edu/accepting-that-war-sustaining-objects-are-legitimate-targets-under-ihl-is-a-terrible-idea/

[25] Iulia Padeanu, Accepting That War Sustaining Objects are Legitimate Under IHL is a Terrible Idea, Yale Journal of Law, 2017