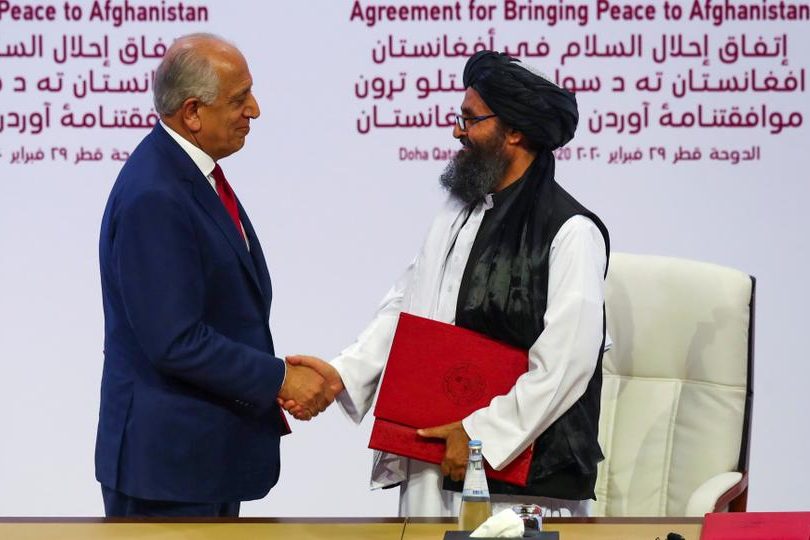 After over 18 years of war in Afghanistan, the US and the Taliban, the two parties to the conflict i.e. a State and an Insurrectional Movement respectively, concluded the “Agreement for Bringing Peace to Afghanistan” (“Doha Accord”) with a view to end the war.[1] This article will engage in a two part inquiry. It will start by identifying the legal basis for peace agreements between States and Insurrectional Movements and then identify the elements in peace agreements which are purportedly grounded in International Law and whether the Doha Accord incorporates such elements and if so, to what extent.

As will be elaborated below, peace agreements incorporate elements which are typically within the realm of sovereignty of a State. If such agreements are indeed grounded in International Law, it could theoretically, ‘internationalize’ these inherently ‘domestic’ issues.

The agreement in the instant case, the Doha Accord broadly provides for the following:[2]

The First Inquiry: Legal Basis for International Agreements between States and Non-State Entities

The first inquiry is whether agreements between States and Non-State Entities could be regulated by International Law at all. The law of treaties, namely the Vienna Convention on the Law of Treaties of 1969[3] (“VCLT”), governs the application and interpretation of treaties, however, the scope of application of the VCLT is limited to “treaties between states”.[4] Nevertheless, the VCLT provides for a “savings clause” in the form of Article 3, which states that while the VCLT does not apply to agreements concluded between States and other subjects of International Law, its non-application (in those cases) shall not affect:

Therefore, it can be safely concluded that without prejudice to the provisions of the VCLT an agreement between a State and other subjects of International Law can have legal force.

Are Insurrectional Movements ‘other subjects of International Law’ within the meaning of Article 3 of the VCLT?

In conclusion to the first inquiry, Insurrectional Movements, albeit having diminished international legal capacity, do nonetheless qualify as ‘other subjects of international law’ within the meaning of Article 3 of the VCLT and therefore, agreements concluded between them and States could a) have legal force and b) be subject to International Law independently of the VCLT. (Articles 3(a) & (b)).

The Second Inquiry: To what extent are Peace Deals between States and Insurrectional Movements grounded in International Law?

The elements of peace agreements purportedly subject to International Law

While these peace agreements have been concluded within their unique respective contexts, they typically incorporate two constituent elements. Firstly, they aim to suspend hostilities and the parties reciprocally commit not to use force against each other and secondly, they typically include clauses aimed at the political settlement of the conflict.[13] These features are significant in determining the extent to which peace agreements are grounded in International Law.[14]

With respect to the first constituent element i.e. ceasefire or suspension of hostilities: the question is whether the parties reflect a will to apply, within States, the rule prohibiting the use of force as set out in Article 2(4) of the United Nations Charter?

Traditionally, the ‘use of force’ within a State is considered a matter pertaining to its sovereignty and thus within the ambit of a its own domestic jurisdiction. Extension of the rule prohibiting the use of force ‘internally’ could ‘internationalize’ this issue and give parties to the agreement the benefit of this rule and consequently, the ‘right to self-defense’ if such agreement is breached.

With respect to the second element i.e. political settlement: the question is, does achievement of a political settlement pursuant to overarching principles of “democratic” “equality of citizens” and “human rights” reflect a will to ground the agreement within the aforesaid principles as they are understood in International Law?[15]

Here again, every State has the sovereign right to determine their political, economic, social, and cultural regime.[16] Allowing insurrectional movements to seek compliance of a particular form of ‘political settlement’ pursuant to the above-mentioned overarching principles of International Law could also ‘internationalize’ a purely domestic issue.

While the Doha Accord does indeed contain provisions aimed at the suspension of hostilities,[17] it leaves the “political settlement” to subsequent “Intra-Afghan Negotiations”[18] so this article will limit itself to exploring the first constituent element i.e. whether a ceasefire can be considered an application of the international prohibition on the use of force.

Ceasefires as an application of the international prohibition on the use of force?

At the outset, it must be noted that Article 2(4) of the UN Charter was never envisaged to apply to Non-State Entities as the prohibition clearly applies ‘between States in their international relations’ and not ‘within States.’ This enquiry however is whether the emerging practice of States and Non-State Entities by agreeing to a ceasefire and not ‘using force’ against the other shows a will of the parties to apply the ‘international prohibition on the use of force’ as set out in Article 2(4) of the Charter ‘within States’ and if so, whether the supposed breach of the ceasefire is treated as a violation of such ‘prohibition’?

Ceasefire Agreements either proclaim a cessation of hostilities or express, in less specific terms, a renunciation of violence or of the use of armed force by one or both parties. For example, the Doha Accord says that the Taliban shall take steps to ensure that the soil of Afghanistan is not used ‘to threaten the security of the United States and its allies’ and take measures to prohibit other persons or groups from doing so.[19]

The ‘cessation of hostilities’ in the 2006 Nepal-CPN (Maoist) Agreement was defined as a ‘Ceasefire’ and prohibited all forms of violent attacks between the parties.[20] Other peace agreements have their own unique definition of what constitutes a ceasefire. However, it has been argued that the provisions of such agreements are ‘very remote from the wording and meaning of Article 2(4) (UN Charter), which is indeed never referred to in any of these agreements.’[21]

Nevertheless, there are cases where some peace agreements contain provisions which do indeed reflect language similar to Article 2(4) of the Charter. It is interesting to note that in the Doha Accord, in juxtaposition to the obligation of the Taliban to not ‘threaten the security of the United States and its allies’[22], the US instead obliges to ‘refrain from the threat or the use of force against the territorial integrity or political independence of Afghanistan or intervening in its domestic affairs’.[23] Similarly, Russia and Chechnya have undertaken in a peace agreement ‘to reject forever the use of force or threat of force in resolving all matters of dispute.’[24]

However, even in those cases, to argue that a conclusion that the parties to the agreement, by incorporating language similar to Article 2(4) in the peace agreement, envisaged a will to have their mutual relations regulated by the prohibition on the use of force in international relations would be excessive.[25] This is because, practically, in cases of breach of agreement, the parties do not see the breach as a violation of the prohibition on the use of force and consequently, do not avail the right to retaliate in self-defense[26] (under Article 51 of the Charter) but rather specific consequences (usually provided for in the agreement) follow such as activation of third party monitoring mechanism[27], etc.

While the Doha Accord prima facie doesn’t contain any such ‘monitoring mechanism’, there are alleged (and confidential) annexes to the said agreement which do contain “a robust monitoring and verification mechanism.”[28] This was seen recently, in the form of talks to ‘reduce violence’, when tensions between both parties escalated due to a resumption of hostilities after the signing of the Doha Accord.[29]

Therefore, it can be safely concluded that the Doha Accord is not evidence of the US and the Taliban’s will to apply the rules of international prohibition on the use of force as enshrined in Article 2(4) of the Charter ‘within States’.

Does a UN Security Council endorsement give legal effect to a Peace Agreement?

On 10 March 2020, the UNSC adopted a resolution ‘welcoming the significant steps towards ending the war’ through the Doha Accord whilst ‘urging the Government of the Islamic Republic of Afghanistan to advance the peace process, including by participating in intra-Afghan negotiations.[30] Similarly, on 18 December 2002, the UNSC whilst expressing satisfaction at the conclusion of the agreement, ‘welcome[d] the signing of the ceasefire agreement between the Transitional Government of Burundi and the Conseil national pour la défense de la démocratie-Front de défense de la démocratie (CNDD-FDD).’[31]

However, such ‘statements are of little value when it comes to pronouncing on the legal force and value of such agreements. The only observation that may be made at this stage is that the Security Council deems the conclusion of peace agreements appropriate.’[32]

Even in cases where the UNSC uses clearly ‘directive’ language towards the addressees to seek compliance with a peace agreement, it is argued that in such cases, the UNSC is not pronouncing upon the legal effects of the peace agreement, rather the UNSC is acting on its mandate to ‘maintain or restore international peace and security.’[33] This was the case when the UNSC, under a Chapter VII Resolution, ‘condemn[ed] the flagrant violation of the cease-fire agreement”[34] and ‘urge[ed] [all parties] immediately to begin resolutely implementing all the commitments they have made under these agreements’[35] during the first Ivorian Civil War because it determined that the ‘situation in Côte d’Ivoire continues to pose a threat to international peace and security in the region.’[36]

Therefore, in the case of Doha Accord, the UNSC merely welcomes the conclusion of the agreement and this does not bestow legal force upon it.

Peace Agreements between States and Insurrectional Movements are becoming increasingly common and although they may have legal force outside the scope of the law of treaties, the exact type of international obligations they seek to create is ambiguous since each agreement has varied circumstances and provisions. Ultimately, it will depend on the implementation of the agreement itself to determine whether the parties intended to be bound by its provision as they are understood in the international legal sphere. As this article has shown, however, the practice so far suggests otherwise, and the Doha Accord is the latest example of this.

It will remain to be seen whether such agreements will, in the future, be grounded in International Law and therefore ‘internationalize’ issues which are inherently ‘domestic’ in nature.

[1] Agreement for Bringing Peace to Afghanistan between the Islamic Emirate of Afghanistan which is not recognized by the United States as a state and is known as the Taliban and the United States of America, 29 February 2020 (“Doha Accord”), available at : https://www.washingtonpost.com/context/u-s-taliban-peace-deal/7aab0f58-dd5c-430d-9557-1b6672d889c3/?itid=lk_inline_manual_3

[11] Comprehensive Agreement concluded between the Government of Nepal and the Communist Party of Nepal (Maoist), available at: https://peacemaker.un.org/nepal-comprehensiveagreement2006

[12] Final Agreement to End the Armed Conflict and Build a Stable and Lasting Peace, available at: https://peacemaker.un.org/node/2924

[24] Peace Treaty and Principles of Inter-relation between the Russian Federation and the Chechen Republic of Ichkeria, 12 May 1997, Article 1, available at: https://peacemaker.un.org/russia-chechen-ichkeria-treaty97

[28] New York Times, A Secret Accord With the Taliban: When and How the U.S. Would Leave Afghanistan, David E. Sanger, Eric Schmitt and Thomas Gibbons-Neff, 8 March 2020, available at: https://www.nytimes.com/2020/03/08/world/asia/taliban-afghanistan-annexes-peace-agreement.html