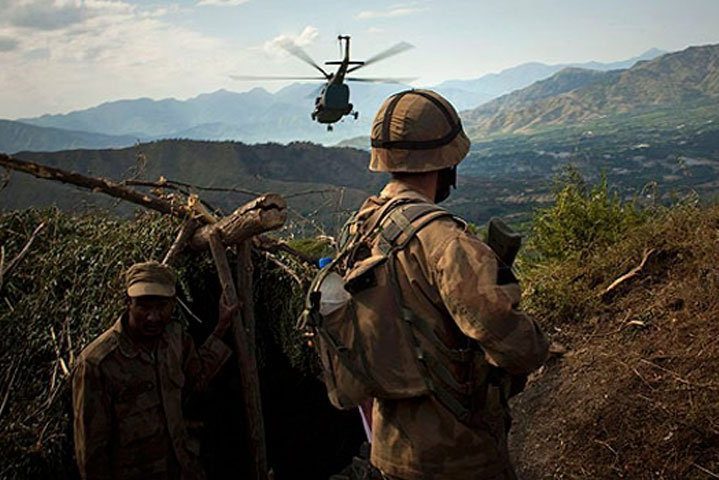 On June 8, 2014, 10 militants disguised as security forces attacked the cargo terminal at Jinnah International Airport, Karachi. The gunmen fired automatic guns and used hand grenades in the six-hour long attack before the army regained control of the terminal. A total of 36 people were killed and the Tehrik-i-Taliban Pakistan (TTP) claimed responsibility for the attack. In 2016, a number of cases were filed by insurance companies claiming compensation against airline carriers for destroyed cargo during the attack. The airline carriers argued that they were exempt from liability because the attack constituted an armed conflict. This article will discuss the judgment of the Sindh High Court of May 6, 2020, EFU General Insurance Ltd., vs. M/s. Emirates Airline / Emirates Sky Cargo and Others, in which these cases were decided. The court held that Pakistan was involved in a non-international armed conflict against the TTP at the time of the attack and that, therefore, airline carriers were precluded from liability.

Under Rule 18(2)(c) of the Carriage by Air Act 2012, airline carriers are not liable for destroyed cargo if it has resulted from an act of war or armed conflict. The carriers argued that the attack constituted an armed conflict under this provision. However, the insurance companies contended that it was not an armed conflict but a terrorist attack. The key issue then before the court was to determine whether the attack was an act of terrorism to which international humanitarian law (IHL) did not apply or whether it constituted or was part of a non-international armed conflict to which Pakistan and TTP were party.

Act of Terrorism or an Armed Conflict?

any act intended to cause death or serious bodily injury, or extensive damage to property, when the purpose of such act, by its nature or context, is to intimidate a population, to provoke a state of terror in the general public, a group of persons or particular persons for political purposes, or to compel a government or an international organisation to do or abstain from doing any act’.[1]

It has in fact been argued that a lex specialis approach be adopted with regards to terrorism and armed conflict wherein terrorism laws apply during peacetime and IHL applies during an armed conflict. This is supported by the exclusion clause in Article 19(2) of the 1997 Convention for the Suppression of Terrorist Bombing which states that “The activities of armed forces during an armed conflict, as those terms are understood under international humanitarian law, which are governed by that law, are not governed by this Convention…” The combination of art. 2(1)(a) and art. 21 of the Terrorist Financing Convention has the same effect.

Therefore, if the incident was an act of terrorism occurring in peacetime then IHL would not apply and an armed conflict would not exist under Rule 18(2)(c) of the Carriage by Air Act. However, if it was an attack which started or occurred during an armed conflict then airline liability would be precluded and IHL would apply.

Terrorism in an Armed Conflict

Acts of terrorism that transpire within an armed conflict are subject to International Humanitarian Law even if the act happens in a territory where the conflict is not taking place.[2] It is sufficient for the incident to be linked to the existing armed conflict.[3] Such acts also do not change the legal status of the conflict.[4]The 1977 Additional Protocols I and II to the Geneva Conventions of 1949 also outline terrorist acts as all such acts of violence that intend to terrorize the general public and renders them unlawful unless the attack occurs on military targets.[5] Furthermore, the act of ‘inflicting terror on the civilian population’ is also unlawful under IHL as was held in the Stanislav Galić case decided by the ICTY. In this case he was convicted on the basis that he had conducted a shelling and sniping campaign in the city which was indiscriminate and disproportionate.[6]

Common Article 3 of the 1949 Geneva Conventions (Common Article 3) refers to non-international armed conflicts as those “occurring in the territory of one of the High Contracting Parties”.[7] It recognises a low threshold of violence, as it does not impose any criteria about what may constitute as a non-international armed conflict. The only condition it stipulates is that the conflict must take place within the territory of a state, and the conflict must not be of an international character. It implies that the provision applies to disputes between non-governmental armed forces and state forces; or between two or more such groups.[8]

The 1977 Additional Protocol II to the Geneva Conventions of 1949 (Additional Protocol II) classifies non-international armed conflicts as hostilities between State forces and armed dissident groups or other organised armed units, who exercise control over a large part of the territory that allows them to carry out ‘sustained and concerted’ military attacks.[9]

The restrictive nature of this definition is evidenced by three requirements and all prerequisites need to be satisfied cumulatively: (1) non-state actors must exercise control over a sufficiently large territory that allows them to carry out coordinated military operations; (2) only applicable to conflict between rebel forces and government troops; and (3) the conflict must take place in the territory of the State that has ratified Additional Protocol II.[10]

The court acknowledged that acts of terrorism are distinguished from the definition of an armed conflict and stated that most actions against terrorist groups are not part of an armed conflict. The judgment does not, disappointingly, refer to the Tadić case but rather to an ICRC report which provides the criteria mentioned above. It held that the attack was committed by an organised group which had engaged in a series of hostilities spread over many years, therefore, the criteria stand fulfilled. The court also ended the judgment with the rather abstract conclusion that the country was in a state of war with terrorist militias. However, no adequate analysis of the existence of a non-international armed conflict under the Tadić criteria was undertaken.

While TTP’s ability to sustain and mount coordinated operations in Pakistan meets the ICTY’s criteria of the degree of organisation required from a non-state armed group,[17] the requirement that hostility must attain a minimum level of intensity remains unfulfilled. The judgment relies on the Supreme Court’s decision in the District Bar Association vs. Federation of Pakistan, 2015 and instances such as the attack on the Army Public School in Peshawar on December 2014 to fulfill the requirement of intensity of violence. However, these are all acts that took place after the attack on Karachi Airport. Therefore, they cannot be used to satisfy the intensity requirement retroactively.

The Pakistani Armed Forces did launch a full military combative attack against Tehrik-i-Taliban Pakistan in North Waziristan and Khyber Tribal Agency on June 15, 2014, in response to the attack.[18] It may then be argued that the attack on Karachi Airport sparked the non-international armed conflict in the Federally Administered Tribal Area. However, the attack on Karachi airport should be considered individually or holistically with acts of violence prior to June 8, 2014 to establish the existence of non-international armed conflict. Its subsequent incitement of an armed conflict in a geographically distant location would arguably not satisfy the criteria under Tadić.

As far as the argument that the airport attack was part of a pre-existing non-international armed conflict goes, Pakistan has seen numerous displays of violence since as early as 2002 between the State’s Security Forces and non-state actors. However, it may be argued that such acts of violence were isolated and sporadic in nature, and thus do not fall within the purview of non-international armed conflict and instead are mere instances of terrorist violence. The judgment itself reproduces an ICRC report which states that terrorist attacks after 9/11 were not treated as an armed conflict but as crimes.

Another argument that may be made is that the frequency of fighting over time and spread out over territory, given the number, duration and intensity of individual confrontations, have resulted in a non-international armed conflict. In 2007 and 2009, Pakistan’s Armed Forces started military operations in the Federally Administered Tribal Area and Khyber Pakhtunkhwa to break the power of Tehrik-i-Taliban Pakistan and other affiliated organizations in the region. The engagement of State Forces and Non-State Actors may signify the attainment of the level of intensity of the hostility. Furthermore, due to the nature of the conflict in the Federally Administered Tribal Areas and the gravity of military action that took place points to the presence of a non-international armed conflict in Pakistan. It satisfies the criteria set under Common Article 3 of the Geneva Conventions 1949; the Additional Protocol II of 1977 and ICTY’s judgment in Tadić. However, these active hostilities ended in 2010 therefore it is unlikely that they could be linked to an attack four years later given the requirement under Tadić that they be ‘protracted’.

Moreover, the judgement relies on the Abella Case to establish the existence of a non-international armed conflict. In that case, 42 armed persons had attacked a military barracks at La Tablada, Buenos Aires on  January 23, 1989 which was followed by intense combat between the attackers and the Argentine military in which 29 people died. According to the appreciation of the facts by the Inter-American Commission on Human Rights, the attack could not be characterized as a situation of internal disturbance. The conflict was a direct confrontation between non-state actors and government armed forces. The armed attack on the base was diligently planned, coordinated and executed. The Commission held it was significant that the conflict was ‘…a military operation, against a quintessential military objective – a military base.’ The Commission held that even though the violent attack lasted for only 30 hours, it was of such intensity that it triggered the application of Common Article 3.[19]

In sum, determining the threshold of application for a non-international armed conflict requires an objective assessment of the criteria as established by IHL and jurisprudence from international courts and tribunals. This assessment is often a difficult task given the many factors which should be considered in making such a determination. The lack of a clear demarcation between terrorist incidents and sufficiently protracted violence by an organized armed group contributes to this difficulty. While the Sindh High Court attempted to grapple with these issues the judgment rendered falls short in adequately clarifying the law and its application in this particular case. The lack of reliance on primary source material as well as interaction with the criteria outlined above has resulted in a largely confusing and wanting order which may raise more questions than it answers.

[8] Claude Pilloud and others, Commentary on the Additional Protocols of 8th June 1977 to the Geneva Convention of 12th August 1949 (Jean Pictet ed, Kluwer Academic Publishers 1987) para 4339.