India and Pakistan have had a troubled history that is riddled with skirmishes, conflicts, and wars, which for the most part have stemmed from territorial disputes and threat perceptions. Sir Creek is one of those territorial disputes that is yet to be resolved. Even though over the course of history both sides have come close to settling the matter, a resolution has remained elusive. Unfortunately, climate change is now making the issue more complex and impacting its core dynamics.

Locating the Dispute and its Opposing Claims

The Sir Creek dispute exists over a 96 km long stretch of water in the marshlands of the Rann of Kutch in the Indus River.[1] It falls along the border of the Sindh province (Pakistan) and the state of Rajasthan (India). At the core of the dispute is a colonial history, as has been the case with other territorial disputes between post-colonial states, and it stems from two different interpretations of where the boundary lies between Kutch and Sindh. During colonial times, Sindh was part of the Bombay Presidency in pre-partition India.[2] Later, Sindh became part of Pakistan after the country’s independence but the dispute over the boundary delimitation along Sir Creek and subsequent maritime boundary delimitation was not settled in that process of decolonization and has continued to date.[3]

More specifically, the Sir Creek issue has persisted due to the differing interpretations of the 1914 resolution that was passed by the Government of Bombay at the time of British colonial rule in the Subcontinent.[4] Pakistan bases its claims on the international boundary to be in accordance with the map appended to the 1914 resolution,[5] which runs along Sir Creek’s east bank; shown as the green line in the map. Whereas, India argues that the ‘Thalweg’ principle should be applied to lay the boundary mid channel;[6] shown as the red line in the map. 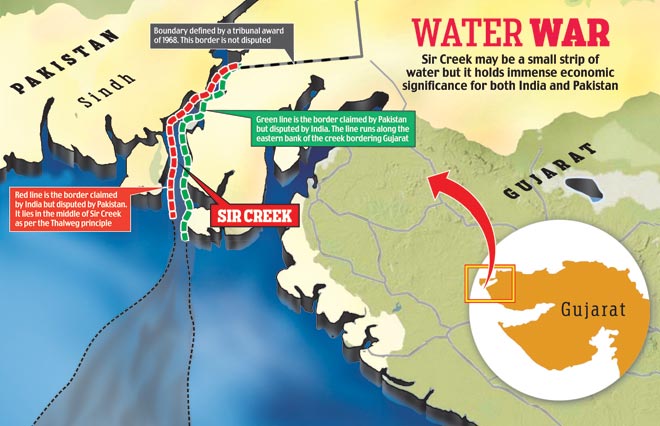 While both sides have come close to resolving the matter and the dispute itself is considered a low hanging fruit when you compare it with other territorial disputes between India and Pakistan such as Kashmir, a settlement of the issue has remained elusive also due to the area’s significance. It is not just a random piece of land, there is a strategic significance based on the economic resources that can be claimed once the dispute is resolved. The maritime boundary delimitation will determine a substantive amount of exclusive economic resources each side receives as per the United Nations Convention on the Law of the Sea (UNCLOS). The reason being that depending on where the delimited boundary of Sir Creek intersects with the coast will have a bearing on the respective country’s Exclusive Economic Zone (EEZ) by 250 square miles.[7] Meaning that either India or Pakistan stand to gain 250 square miles in their EEZ, depending whether the green line or the red line as shown in the map above is agreed upon for delimitation.

Climate Change as a Dispute Multiplier

The dispute is and will be made more complex and the claims of each side will be affected due to the climate change manifestations that India and Pakistan share. Both suffer from a high degree of Sea Level Rise (SLR) from a varied set of intersecting factors such as a higher than usual level of warming of the Indian Ocean,[8] and glacial melting in the Himalayan region.[9] As a rule of thumb, water based territorial disputes are highly susceptible to being impacted by climate change because it significantly alters the conditions that serve as the basis of a state’s claims.[10] Consider the map of Sir Creek, a marshland along the Arabian Sea, and placed in Sindh’s flat coastal topography.[11] This makes it highly susceptible to climate change, specifically SLR and as a result, the respective claims of India and Pakistan in the dispute are affected.

Dipping back into history, India and Pakistan were supposed to submit their official claims to the maritime territories, as part of having ratified UNCLOS, by May of 2009.[12] Towards this end, Pakistan’s President and India’s Prime Minister at that time agreed to conduct a survey of Sir Creek via neutral experts in order to form the demarcation perceptions of each side.[13] This was meant to clarify demarcations perception of both countries but due to political tensions following the 2008 Mumbai attacks there was no substantive outcome from this specific initiative towards settling the Sir Creek issue.

As a result of SLR’s impact on Sir Creek’s topography, the respective claims of India and Pakistan possess a new factor of complexity that must be addressed first in order to resolve the dispute. The reason being that SLR directly affects Sir Creek’s tidal channel.[14] This adds an additional stress factor of a new survey to reassess the topography for each side’s claims. For instance, both sides would have to agree to a new survey, conduct the survey, agree to its findings, and then move towards negotiations on the basis of the newly informed claims. This additional layer to an already challenging process, even if there is political will on both sides, lowers any chances of dispute resolution. It should be noted that the survey that was agreed upon in 2006 did not lead to a fruitful outcome due to political and security disturbances.[15]

As a result, SLR from Climate change can significantly heighten tensions between India and Pakistan. A higher sea level would add to India’s argument of using the ‘Thalweg’ principle in International Maritime Law to delimit the waterway mid channel of its principle navigable channel because Sir Creek’s tidal channel will become more navigable.[16] This could weaken Pakistan’s claim that it is not navigable and that the demarcation should be on its eastern bank as per the map appended to the 1914 resolution. Given the history of India and Pakistan where they have engaged in armed conflict on territorial disputes, climate change creates an added layer of contention, stress, and possible confrontation on Sir Creek.

[8] Zumbish, “Global CO2 concentration in atmosphere hit new high in May 2nd week: Report,” Down to Earth, May 18, 2022, https://www.downtoearth.org.in/news/climate-change/global-co2-concentration-in-atmosphere-hit-new-high-in-may-2nd-week-report-82907.

Faraz Haider is a Research Associate at the Faculty of Aerospace and Strategic Studies (FASS) and graduate student in Strategic Studies at FASS in Air University, Islamabad. His research focuses on climate security and national security. He holds Bachelor of Arts (Politics and International Relations) and a Bachelor of Business (Economics) from the Swinburne University of Technology, Australia.

Insights from Meta’s Oversight Board Cases on the Conflict in Ethiopia
December 1, 2022