Legal Consequences of the continued presence of US forces in Iraq 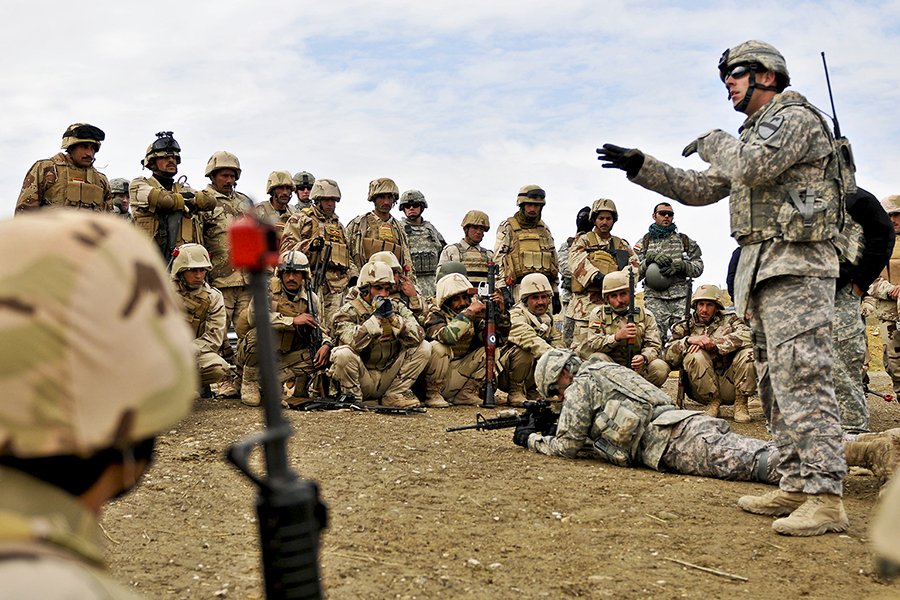 After the killing of Qasem Soleimani, chief commander of the Islamic Revolutionary Guard Corps’ (IRGC) Quds Force, by US forces on January 3, 2020[1] in Iraq, the Iraqi Council of Representatives (“CoR”) passed a Resolution calling on the government to seek the withdrawal of US forces from Iraq.[2] The resolution stated that “The Iraqi government must work to end the presence of any foreign troops on Iraqi soil and prohibit them from using its land, airspace or water for any reason“.

The US State Department then released a press statement stating that troop withdrawal would not be discussed during negotiations with Iraq,[3] signifying a refusal to comply with any requests for a withdrawal.

In the aftermath of the CoR resolution and the US response, the issue of Iraqi ‘consent’ to the presence of US forces within her territory arises. This article will address the question of whether continued US presence would be in contravention to such ‘consent’ and if so, what would be the legal consequences of this contravention.

Legal Basis for US presence in Iraq

The current US presence in Iraq began in 2014 when US and Iraqi Governments concluded an informal executive-to-executive agreement in the form of “diplomatic exchange of notes”[4] (“2014 EoN”) which apparently provided the legal basis for US presence in Iraq to counter the rising threat of the Islamic State. US forces then formally returned to Iraq after their previous withdrawal[5] in 2011. The said 2014 EoN were concluded pursuant to the 2008 U.S.- Iraq Strategic Framework Agreement[6] (“2008 SFA”) which guides the US’s overall political, economic, cultural, and security ties with Iraq.

According to Nolte, the notion of ‘consent’ or “intervention by invitation” is “mostly used as a shorthand for military intervention by foreign troops in an internal armed conflict at the invitation of the government of the State concerned”.[7] The International Court of Justice (“the Court”) dealt with the issue of ‘consent’ in the Case Concerning Armed Activities On The Territory Of The Congo[8] (“Armed Activities Case”) wherein the Democratic Republic of Congo (“DRC”) consented to the presence of Ugandan troops in the eastern border area between the two states. In that case, the DRC alleged that whilst it had granted prior consent to the presence of Ugandan troops within its territory from May 1997 till September 1998, this consent had been withdrawn by Presidential decree, and the continued presence along with military and paramilitary activities of Ugandan troops from September 1998 till July 1999 under the pretext of “self-defense”[9] amounted to aggression.[10]

The Court then deliberated upon the notion of consent and noted that there are no specific requirements as to the ‘form’ of such consent and its withdrawal.[11] However, the Court added that intervention by consent is not ‘open-ended’ and that even had consent continued ‘the parameters of that consent, in terms of geographic location and objectives, would have remained thus restricted’.[12] Ultimately, whilst holding that the consent of the DRC stood withdrawn by 8 August 1998, the Court, stopped short of calling the continued presence of Ugandan troops within the DRC ‘aggression’ and instead held it was a violation of prohibition on the use of force as stipulated in Article 2(4) of the UN Charter.[13]However, Judges Elaraby and Simma, argued in their separate opinions that the actions of Ugandan troops amounted to aggression.[14]

As already established, US forces presence in Iraq was pursuant to Iraqi consent. But did the CoR Resolution have any effect on this consent? Which organ of the state is responsible for granting or withdrawing consent?

Till date, the arrangement between the US and Iraqi Governments under the 2008 SFA has not required a separate approval from the Iraqi CoR.[15] Although the CoR is Iraq’s Parliament, this shows that in the particular context of this case, the CoR has had a negligible role in governing issues of consent. This coupled with the non-binding[16] nature of the resolution leads to the conclusion that it did not have any effect on consent.

So, whose consent matters? As far as state practice is concerned, the author of consent “must be the highest available State organ in order to ensure that the State speaks with one voice”.[17] The aforementioned 2014 EoN were concluded pursuant to an invitation by the erstwhile Iraqi Prime Minister Nuri Kamal al-Maliki[18] followed by a formal request.[19] In the context of the present case, the Iraqi PM qualifies as the ‘highest available State organ’ and would have the authority to allow and withdraw consent. While the erstwhile Iraqi (Caretaker) PM, Adel Abdul-Mahdi had stated that it would be “up to the next government to see through the CoR decision to oust US Troops”,[20] this next government of the current PM-designate Mohammed Allawi is yet to survive a vote of confidence from the CoR,[21], before assuming control of affairs.

Interestingly, the 2014 EoN apparently contained a ‘one-year cancellation clause’[22] i.e. in case of withdrawal, it would go into effect after a period of one year. While Iraq has not confirmed the existence of such clause and because the 2014 EoN are classified[23], the ‘binding’ nature of such clause (should it exist) is a question to be addressed another time.

Consequently, the negligible role of the Iraqi CoR in this matter coupled with the reluctance on the part of the Iraqi PM leads to the conclusion that the continued presence of US forces within Iraq are still there with the consent of Iraq.

Be that as it may, an act of ‘aggression’ may occur even if the “armed forces of one State which are within the territory of another State with the agreement of the receiving State, act in contravention of the conditions provided for in the agreement or any extension of their presence in such territory beyond the termination of the agreement”[24]

As described above, the 2014 EoN were concluded pursuant to the 2008 SFA between the US and Iraq. The 2008 SFA contained the ‘Principles of Cooperation’ which formed the basis of the said agreement and included. inter alia:

Article III(e) of UNGA Res. 3314 makes it clear that an act of ‘aggression’ may occur even if the armed forces of a state act in contravention to the agreement of consent. This is also in line with the Courts dictum in the Armed Activities Case that consent is not open-ended and that the parameters of such consent with respect to its objectives must be adhered to.

The principal agreement of consent in the present case i.e. 2008 SFA, explicitly prohibited the use of Iraqi territory for carrying out armed attacks against other countries and it is clear that the targeted strike on Qasem Soleimani, a serving commander within the Iranian Armed Forces, was in fact a strike against Iran using Iraqi territory as a launch point rendering the events of 03 January, 2020 an act of aggression attributable to the US against Iraq.

Lastly, the breach of the 2008 SFA constitutes a ‘breach of an international obligation’ since “any violation by a State of any obligation, of whatever origin, gives rise to State responsibility and consequently, to the duty of reparation”[26] and that “state responsibility can arise from breaches of bilateral obligations”.[27] Since there is no ambiguity that the US forces were organs of the State who carried out the conduct amounting to the said breach, the twofold elements of an internationally wrongful act[28] are satisfied thereby rendering the US responsible.

[5] The Guardian, Barack Obama announces total withdrawal of US troops from Iraq, 21 October 2011, available at: https://www.theguardian.com/world/2011/oct/21/obama-us-troops-withdrawal-iraq

[9] Uganda maintained that it’s continued presence in DRC was an exercise of lawful self-defense.

[25] Section I: Principles of Cooperation, Strategic Framework Agreement for a Relationship of Friendship and Cooperation between the United States of America and the Republic of Iraq, 17 November 2008, available at: https://photos.state.gov/libraries/iraq/216651/US-IRAQ/us-iraq-sfa-en.pdf

[26] Case concerning the difference between New Zealand and France concerning the interpretation or application of two agreements concluded on 9 July 1986 between the two States and which related to the problems arising from the Rainbow Warrior affair, UNRIAA, vol. XX (Sales No. E/F.93.V.3), p. 215 (1990), Para. 75